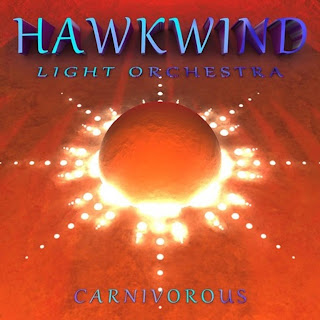 Hawkwind Light Orchestra, Psychedelic Warriors, Sonic Assassins… even Hawklords… indications that this is Hawkwind doing something a little bit different, a touch outside of their envelope or perhaps without some of the current complement of band members. That’s the case with Carnivorous – you’ll spot immediately the anagram involved here – initially a Dave Brock solo project tapping into that rich seam of ideas that’s been mined over the years by the band, from ‘Starfarer’s Despatch’ and its offspring ‘Spirit of the Age’ onwards, the interface between human and android.

That solo record was started on in late 2019, with current Hawks Richard Chadwick and Magnus Martin adding pieces the following January and February, until lockdown forced a remote working to complete the album. So, no Niall Hone, and no Tim Blake, but a fresh line-up for the second HLO record, following Dave, Richard and Niall’s Stellar Variations under the same badge from a few years back.

It’s the best studio thing to come from any configuration of the band in recent times. Now, I know when I say that, that last year’s All Aboard The Skylark was very well-received, while I have a particular liking for the Marmite of Road To Utopia, but Carnivorous really hits the spot, feels like a properly cohesive Hawkwind record even when being a bit more wide-ranging and mixing their familiar spacerock sound with some traditional barroom blues lilts, as on ‘Model Farm Blues’.

You get this from the start, ‘Dyna-mite’ is a purposeful and punchy lift-off with some classic Brock guitar that will sound fantastic live when these days have passed, as they surely will, and yet has a rich studio texture to it, meaning that it will also, in all the best Hawk traditions, sound different live as well. ‘An android will last forever / despite humans best endeavours,’ sings Brock, keeping that ‘Spirit of the Age’ going onwards, before the album diverts into the spacious synthesisers of ‘Void of Wasteland’ where Dave’s guitar emerges out of the wash to add vim to this instrumental’s rolling rhythms.

‘Human Behaviour (No Sex Allowed)’ is a strident siren of a dystopian rocker – this is a record about songs, mostly sharply around the three – four minutes mark, though some stretch out a bit further, and the highly topical raison d’etre, ‘The Virus’, clocks in at just over ten, but then this is why it works so well, a collection of memorable tunes punctuated with moments of instrumental reflection (the afore mentioned ‘Void of Wasteland’, the pensive ‘Square Peg Into a Round Hole’) that makes the flow work so smartly.

It reaches urgency towards the later tracks. ‘Lockdown (Keep Calm)’ might be titular good advice but it has something of the relentlessness and vibe of ‘Some People Never Die’ from Church of Hawkwind with its “State of Emergency” and “Stay Calm” samples running through it. [Side note here – isn’t it intriguing just how influential that LP, another side project record in many respects, has become over the years with a reputation that grows and grows]. And then we’re into an epic and provocative ‘The Virus’, which points the finger at meat-eating and, and again often in best Hawkwind tradition, has a really downbeat take on the future of humanity within its cautionary tale (‘is this how it’s going to end?’), before concluding in a bucolic moment that perhaps suggests that, sans humanity, peace has returned to the Earth.

I’d have cut it there, fading out on those more gentle notes, a fitting coda to a solidly rocking record. I think that would have been a perfect ending. Carnivorous carries on, ‘Forgotten Memories’, about the tragedy of Alzheimer’s, what’s noted as the hide and seek of memory, and the melancholic and genuinely emotional ‘Higher Ground’, both songs with real heart to them, so, you know, absolutely not dismissed in wanting the album to finish on those haunting notes that play-out ‘The Virus’, but a reflection that they possibly deserved another home, simply to allow a fade of the record on a different note.

This is the best Hawkwind record of the 21st Century, opportune and apt – great to see the crazy days of lockdown yielding such creative results here.

Looking forward to this!