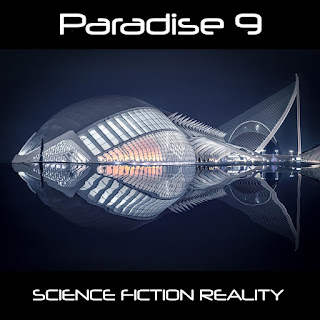 If Paradise 9 had been around back in the day, then surely their space-punk vibe would have made them great stablemates for the likes of Inner City Unit, Underground Zero, and yes, Hawkwind themselves, on the 1980s Flicknife roster. Fast forward to 2021, and how fantastic to see them join the resurgent Flicknife now!

Their debut release for Frenchy's label is Science Fiction Reality ... 'science fiction/science fact/there's no way of going back' ... I've been saying this over the pandemic, all the times in the 70s when, as a teenage SF fanatic, my mum castigated me for reading so much of that 'rubbish science fiction', and yet here we are in the sort of world that the writers of the 60s and 70s were postulating and describing. It's mainstream, embedded in our everyday lives, 'the new society' as Paradise 9 put it in the title track to this highly successful album, itself bright and sprightly and righteously declaiming the modern world of data harvesting, democracy in retreat, new deities and hierarchies springing up around us at pace. Can't get back to where we came from, can't visualise what's coming next.  Perhaps a little too consciously on message on occasion, with their sampling of Greta Thunberg on the opening 'These Are The Days' not out of place ... absolutely not ... but arguably placed too early on and in danger of breaking the opening flow. But, you know what, some messaging can't be said too many times, so it absolutely has a place somewhere on this sharply aware record.

Step back a moment though. Longtime readers of this blog back to its Spacerock Reviews incarnation will have seen the evolution of Paradise 9 over the years, with a revolving cast of collaborators alongside the ever present Gregg McKella; this time out he's lined-up with Alternative TV's Tyrone Thomas (lead guitar), Neil Matthars, formerly of Casual Affair on bass, and Wayne Collyer drumming. It's the familiar Paradise 9 sound, melodic and catchy, totally immediate stuff with a light touch that belies its strident underbelly. Singalong tunes, such as 'Shine On', one that's been around a while, previously popping up on their 1997 - 2017 Live album in a cut from their Kozfest 2016 appearance and which ought really to be considered a classic in waiting at the very least. Sparkly and infectious. (Ha! Can we still say 'infectious' in a good way? This is such a great, please play me on repeat, song!).

I'm reminded on Flicknife's press release for this album that I once described Paradise 9 as being music that represent facets of the counter-culture as a joined-up whole. So long ago - what I see when I research that one, is that I've been writing about them since 2009 - but looking back, I was thinking about the way in which their music over those years has touched on spacerock, psychedelia, reggae, dub and comparing their righteously indignant surveys of, as one earlier song declared, the 'State of the Nation' to, as an equally early reviewer put it, Joe Stummer's straight-up and moral outlook. They still have that fire of rage bottled up in these psychedelic punk tunes. 'Deconstruct, Divide and Rule' and its despair of 'forward motion without a clue' and asking 'is this what you really voted for?' And these votes made by people 'with their backs against the wall'. They're right. What on earth are we thinking these days?

Lest it all get too serious, there's the 'Matter of Anti-Matter' to lighten the tone, a bit like 'Quark Strangeness & Charm' popping up amidst the heavy hitters of 'Damnation Alley' and 'Hassan I Sabbah' to borrow a Hawks analogy, before we get back onto the activist lyrics of 'This is Your Inheritance', that world, that dystopia, we'll get if we don't change course. Useful to remind though, that lyrics are one thing, and creating a sound that bottles the energy and fun that clearly comes from these guys playing together is another. Big ticks in both boxes. And playing out is a trippy mood piece, 'Safe Haven' that floats away in a loop of repetitive space psychedelia and clarinet blowing to ease our troubled minds into a state of perfect bliss that's equally perfectly judged in the way it deviates from and still complements the textures of what's preceded it. Lovely, actually.

Listen, this is an album that sounds great, crisp and clear, and that has a narrative that's completely relevant to these days - and let's give thanks that there are bands out there still that have this burning agenda at their core, because there certainly aren't a lot, or enough, of them.

Posted by Ian Abrahams at 17:45 No comments: