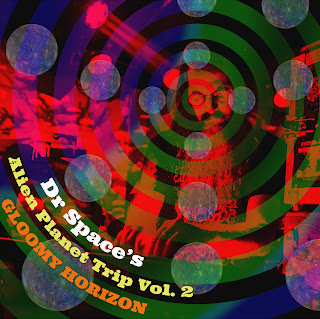 May was a busy month for long-time champion of the spacerock scene, Scott Heller, releasing LPs under his Dr Space by-line (Alien Planet Trip Vol. 2) and as part of the veteran Oresund Space Collective ensemble (Chatoyant Breath), both on the Space Rock Productions label, and gigging around Europe.

It's been quite a while since I've covered any of Scott's releases here, but he continues to be prolific in releasing new music - OSC's Bandcamp site lists no fewer than 61 records that have been available in either physical or digital format - and it's great to see the variety of work that's captured between these two very distinct albums. Alien Planet Trip isn't quite a solo record, with Daniel Lars and Stefan Krey on-board for the five tracks that comprise the vinyl edition, though a sixth digital bonus track sees Scott alone. This second volume, subtitled Gloomy Horizon, is built up from layers of synth and programmed drums, with guitars then liberally cascading across the surface.

It's well-titled in its moody atmospherics. 'The Dark Room Becomes Blue' is a oppressively dense tone piece, full of portentous keyboards, doom-laden and claustrophobic, with banshee improvised guitar lines that screech out of the ether, discordant and unsettling. 'Alien Talk' is full of sonic debris that falls in and out of the ethereally minimalist background, analog sounds that move through, swooping out of the distance and streaming off into the horizon, cluttering the soundscape with myriad noises. 'Lost In The Cave' echoes in its cavernous vacuum, Lars's guitar work right to the fore, dueling with an even greater expanse of analog flotsam and jetsam that cascades around in angular free fall. Alien Planet Trip is a vividly uncompromising and imaginative experiment.

Chatoyant Breath is equally as improvised, culled from a single day of jamming with what's now the principal live configuration of the band joined by 'Gary (Yawning Man)' and Martin from Scott's fellow OSC players' band Univerzals. It's often the more melodic counterpart to Alien Planet Trip, 'Peaceful Patterns' opening things with a mellow, chilled-out spacey vibe, still having that ribbon swoop of synth that cuts across the tunes, but now part of something that implores you to dive deep into its lulling music and drift away on its tripped-out astral plane. 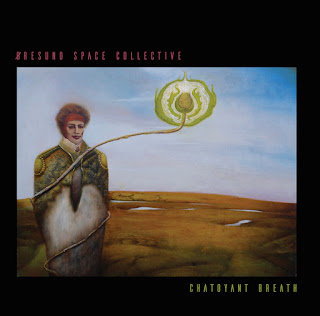 It feels like it could go on forever, never needing to find proper form but following its theme loosely, simply being in the groove, shifting and reassembling all the time, the drums getting more muscular as the musicians lock into a heavier sensibility (at least on the digital; there the day's work yields over two hours of music... the vinyl, of course, will  edit to the highlights on its four-sides).

'Angular Ambrosia' starts out with crystalline vibrations underpinned by Jiri's rumbling bass lines, building into a more encompassing picture, the musicians becoming ever busier in adding their bits and pieces so that it's a piece that moves a long way from its origins and becomes almost a segmented collection of movements, full of changes and surprises, just as its jam-improvisation creation should be. 'Turbulent Trepidation' follows the same modus-operandi, twisting and turning from one idea to the next.

The final side of the vinyl is the title track, quite beguiling, following the patterns of its predecessors in becoming evermore urgent, busy and insistent as it makes its way from its easy-going starting point into an increasingly frenetic jam. What a day these guys had together!

Posted by Ian Abrahams at 17:44 No comments: