Moon Duo were very much my spacerock band of 2017 with their Occult Architecture Volume 1 and 2 and though I've yet to see them live, having been a longtime fan of Ripley and Sanae I've been enthusiastically devouring everything they've released, writing about various releases here and in Record Collector over the past few years, and searching YouTube for gig footage - the best of which are the two studio sessions for KEXP.

What can I say about Occult Architecture that I haven't already? Volume 2 has been on repeat here for several months, the lighter contrast to its predecessor's heavy textures and is, perhaps Sparks' Hippopotamus aside, my favourite record of 2017, and most certainly the best new spacerock album I listened to during last year. In Record Collector I heard the first album as being "Dense paint rendering storms on canvas, oppressive. Forecast continues unsettled. They describe it as having elements of English occult literature: Colin Wilson, Aleister Crowley. Mary Anne Atwood, who declared just before her passing that, 'I cannot find my centre of gravity.' This album’s gravity has a strong pull, though, irresistibly dragging us downwards into the repetitive beats of its lo-fi reverberations." I summed by suggesting that "Moon Duo is always predominately about the sound. Words surface out of the swirling maelstrom, an occult ritual within the architecture, another tone adding to mood, but always subservient to the texture, which sweeps from the muscular to the persuasively melodic. Lightness is promised in due course."

When that second record materialised, it was indeed the spring and summer to the first's wild winter. Played back to back it's a brightly-lit antidote to the oppression of its sister. I talked about how "New Dawn, opening here, immediately dispels its elder sibling’s denseness like the air after a thunderstorm, all vibrant and renewed, purifying and cleansing their palate of sounds into the Balearic bliss into the following song, Mirror’s Edge." Summing up, I thought about how "it adds a fresh facet to Moon Duo. We’ve been used to their intensive yet melodic drone since the early days of their Killing Time EP, back in 2009, and while the terrific albums that they’ve released along the way have continued to describe that fuzz and keyboard driven journey, in reaching this album’s sunshine warmth ‘Ripley’ Johnson and Sanae Yamada have elevated their project to a new level." 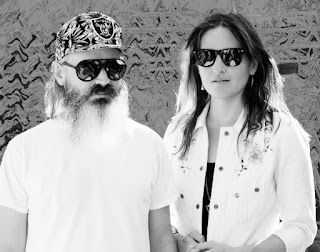 Trusting that they'll be as prolific in 2018 as that outpouring of work saw them being last year, they're kicking-off with a 12" release that's putting them into different territory again, with a dual covers release that sees them doing Alan Vega's 'Jukebox Babe' and The Stooge's 'No Fun' (the later of which isn't yet available for review ... patience, as the record appears on 19th January from Sacred Bones and can be ordered here or in the Amazon link below). A really deft, bubbly, light touch is brought to 'Jukebox Babe', which though it feels like a sidestep to their usual tones, is deliciously infectious... and I'm guessing that having worked on such an expansive, intense, project as the previous work, they've taken the opportunity to do something different and which didn't require such intensive writing, recording, and planning. Looking forward to hearing what they do with 'No Fun'.

Posted by Ian Abrahams at 17:05 No comments: 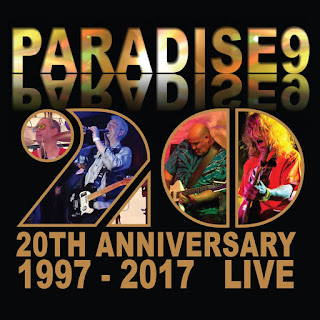 'Feisty punk-space rock' is how I summed up Paradise 9 when I wrote here about their Nothing For Tomorrow EP ... was that really back in 2009? Unbelievable. So that was somewhere just past midway through their existence so far, as the title of this 2CD compilation of live tracks reminds me, gathered up to celebrate their 20th anniversary. Plenty have passed through the ranks since then, but, Gregg McKella and co... on the basis of this set, here's to many more anniversaries to come!

Let's not trawl the history of the band for this review; much of it is in Gregg's interview that accompanies my write-up of their Take Me To The Future album, back in 2013, anyway. But listening through these songs - some really great recordings, some needing the volume jacked-up a bit - I'm reminded of how I've heard the starting-points for their tone and style - as though the In Search Of Space Hawkwind line-up had come together and laid down that milestone of underground outlook and inventiveness just a few years later than they actually did, so that it didn't just have the sprawling spaced-out freakery of the Notting Hill scene of the early 70s, but had picked up the punk rock vibe of '76, '77 as well. With Nik Turner regularly guesting with them, including on some numbers here, its easy to then draw that line and say that they're informed by not only his contribution to early Hawkwind, but his immersion into the punk ethos with Inner City Unit, that perhaps Paradise 9 are an Inner City Unit where the balance is tilted a little more towards the spacerock and bit away from the punk.

If you take that as a very loose starting point, it's hard, really, to think of another band that's done that crossover as well as Paradise 9 have. Of course, in the past they've had the much-missed Judge Trev working with them, a master of the art, and it's fair to also say that Turner had far more success creatively in flowing that path than he did with his rather out of place 1980s temporary return to the Hawk ranks; even while the ICU albums are best described as patchy, they feel more right as a vehicle for what he was doing back then. If ICU pretty much invented that sub-genre, Paradise 9 have nailed it. 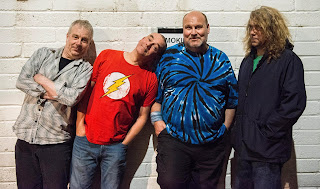 With its discs various entitled 'These Days' and 'Those Days', disc one, the most contemporary tracks, is the strongest in recording quality, being captured at the 2016 Blind Cat Festival and that year's Kozfest. Opening with 'Nothing For Tomorrow', perhaps their most definitive song, sharp and spiky, immediately infectious and yet provocative, the first disc plays so well as a live album, that the following collection, more of an anthology through the years, seems more like a bonus compilation that a proper double - and of course that might have been the intent. 'Nothing For Tomorrow' and 'State Of The Nation' bookend disc one, dual salvos of attitude and intent, on message, on target. That's one big part of what they do, but then there's also moody numbers, such as 'Ocean Rise' ("about our dying seas") that change the tone of the set completely, atmospherically dense and murky, and the hazy, laconic and thoughtful 'Crystalized Moments'. And then there's their opus trip-out tracks, the terrific nine minute 'Shine On' that pulls you into its staccato journey and doesn't let you out again until its good and ready, and the elongated cacophony segue of 'Points Of View' and the insistent chant of 'Take Me To The Future', proper out in the field, pound for the generator, name on the chalkboard, festival stuff.

So if 'These Days' is a disc to showcase the contemporary Paradise 9 - which it's excellent in doing - then 'Those Days' is a sort of all our yesterdays rummage through past line-ups, trawling tapes from 1998 through to 2013, featuring old friends... Nik Turner, Jaki Windmill, Miss Angel (though naturally you'll have to imagine her much-loved multi-costume dance contributions). It's a nicely varied, non-linear, collection; recordings from 1998/99 from The Acoustic Revolution ('I See You Dancing', '700 Feet - Base Jumper', 'Glow') being more angular, sparser, than later stuff, a different approach, while still showing their influences back then, with the pensive '700 Feet - Base Jumper' beyond doubt in conceptual debt to Bob Calvert's narrative on the Sonic Assassins version of 'Free Fall', and a worthy successor to that wonderful stream of consciousness. It's an anthology that shows the how and the why Paradise 9 staked out their claim to their own patch of this pliable genre.

Posted by Ian Abrahams at 16:47 No comments: