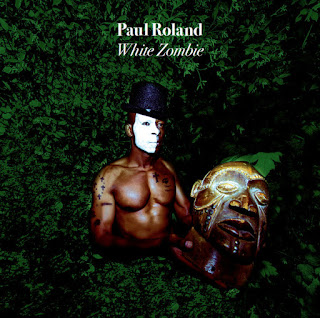 I've related this story before, but several years ago I was in receipt of package of releases from the Italian Black Widow label, including Re-animator by Paul Roland, who I'd not really known about previously but whose album I enjoyed immensely and wrote about, later to receive an email from Paul himself, telling me that he was a Hawkwind fan who'd read my book on the band. And so since then we've been in contact and I've had the opportunity to get so much more acquainted with his work, delving back to his original recordings, The Werewolf of London included, then getting enchanted by other classics of his canon, the charming joys of 'Walter the Occultist' and 'Wyndham Hill', the Marvel Comics influenced 'Dr Strange' and the character-driven tales of 'The Hanging Judge' or Witchfinder General', potted but enthralling sketches. I'm a huge fan.

He's been highly prolific in recent times, concept albums such as Grimm and soundtrack compositions such as Hexen. Career retrospectives have arrived, including a comprehensive 'early years' double from Cherry Red - In the Opium Den - and new work abounds. They've all variously reflected his complementary interests in the bizarre, the macabre, Victorian gaslight horror, EC comics, Lovecraft, and the likes, building new work to his already extensive back-catalogue.

White Zombie is the latest, rooted as ever in many of those preoccupations, but, as he's done with other recent albums, stretching out and expanding the styles that he works in, because each entry to his canon is distinctive, separate, with its own identity and sense of purpose. He talks about having come out of a talk, way back in 1994, that he'd enjoyed with Malcolm Rebennack, Dr John, 'The Night Tripper', "about his early life in New Orleans and his initiation into the cult of voodoo." He'd already used the theme of Voodoo, Baron Samedi, on an early song of his, 'Jumbee' and its an idea that he's revisited again, and indeed the conversation with Dr John, though it fermented ideas, didn't crystalise into music until much later, when experiments with patterns and chants led to something that at the time he considered "raw, primitive ... sung 'in tongues'." 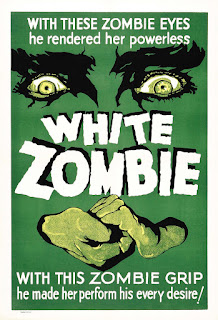 There was a thought to make these songs into a soundtrack for the 1932 Bela Lugosi White Zombie film, itself considered to be the first full-length zombie movie, though that didn't reach fruition. But, okay, what's lost to one project becomes food for another, and with Paola Tagliaferro adding the High Priestess's vocals on chants and a host of Roland's Italian friends making up his band this time around, a finely-tuned concept album has materialised. Sixteen short and sharp tracks, with Paul's keen ear for a good tune and his honed writer's eye for character and setting

What this record has, again in keeping with Roland's other work, is an atmosphere that permeates throughout the tracks. It's a delicious confection of sticky heat, unsettling darkness and that claustrophobic sense of being trapped within a collective madness from which there is no escape; devotional chants of hysteria and feverish reverence to that darkness, underpinned by evocative drum patterns; it takes you firmly out of your surroundings and places you in its settings. In that way, it has a lot in common with my own entry point into the Roland world, via Re-animator those years back, and though its not a sequel by any means, the two albums feel so complementary to each other.

Least we get heavy, I do hear Paul getting his inner Marc Bolan on, for the final track, 'Mambo Jo' - no bad thing... Bolan plays swampy mambo has good mojo, for sure, and there's some great Dick Dale guitar twang on 'Wanga Wanga', but, really, White Zombie is pure, undiluted, Paul Roland and is absolutely among the best of his records.

Posted by Ian Abrahams at 15:37 No comments: