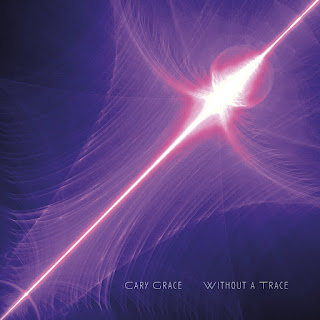 This was a nice little surprise today - a promo of new single from the North Carolinian turned Somerset resident Cary Grace. Her last album, a live set from the 2016 Kozfest, The Uffclume Variations, I've had here for some time and meant to include in an earlier review, but things have continued to be a bit constrained on the blogging front. I will get to it, Cary, honest! But then with this two-track release, set for 5th May on digital download, it provided the perfect starting point for an entry focusing on singles...

So this is 'Without a Trace', b/w 'Star Fire', and I think it's download only, available from Bandcamp via her website, or from iTunes and other digital retailers. Cary works her magic across multiple genres, with last year's live release being experimental and improvisational, aided and abetted by her band, and with special guest appearances from Steffi Sharpstrings and Graham Clark. This new studio record sees her back in a more traditional song structure. 'Without a Trace' is a lusciously delivered love song with a beautiful ruminative tune, 'Star Fire' an immediately delighting and uptempo piece, think of Renaissance with spacey lyrics. Lovely tracks... play them again and again - just as I have this afternoon.

So, between the release of The Uffculme Variations and this single, I most recently heard Cary on The Honey Pot's album, Ascending Scales, where she's involved in a terrific vocal dueling with the band's Crystal Jacqueline on a cover of 'The Witch'. Ah, see what I'm doing here, making a link from one to the next... you'd almost think I know what I'm doing... Jacqui has her own new double album due in June on Mega Dodo, Await The Queen, which I'm covering for Record Collector, but it fits in to mention that while not it's a single, as far as I know, there's just been released the first associated video, for 'Akhbar', filmed in Fez, Morocco and full of, as the advert used to, eastern promise. Exotic, sensuous, and beguiling, this is a delicious appetizer for what I'm sure is going to be a wonderful LP.

Staying with Mega Dodo then - these linking bits are running and running today - let's mention one of their latest signings, Green Seagull, and their single 'Scarlet', b/w 'They Just Don't Know'. This is a quartet formed out of a duo, when Sarah Gonputh (keyboards) and drummer Carlos Redondo hooked up with founders Paul Nelson, of New Electric Ride, and Paul Milne (Hidden Masters, Magnetic Mind) to work up some of the two Pauls' songs. The resulting busy jangles of their 60s-fused psychedelia are bound for a full album later in the year, but these two tracks are a great calling card, frantic and urgent, full of colourful life and absolutely uplifting. Listen, I tore myself away from the Cary Grace to get this one into the CD player for a few spins, so it has to be good. 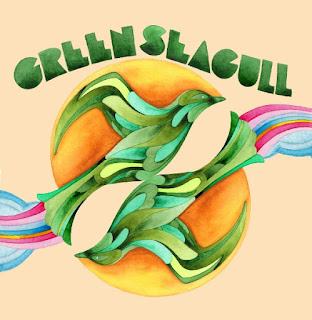 You can pre-order the Crystal Jacqueline album here, while the Green Seagull single is here. Of course, where Mega Dodo is the boutique label for psych bands and their own songs, their friends, the Fruits de Mer label is the psych label of choice for cover versions. (Yes, yes, I know... these links are getting more tenuous as I go along). I'm covering their new Astralasia album, Oceania, in the latest Record Collector, actually not a cover versions thing and already sold-out on the FdM website, but here's a split 7" release that is still in their shop, which features Sendelica and Superfjord paying tribute to Frank Zappa: 'Peaches En Regalia' (Superfjord) and 'Don't Eat the Yellow Snow' (Sendelica). 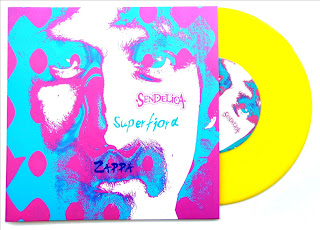 OK, here comes the writings of a musical heretic. I know next to nothing about Zappa and have rarely listened to any of his work. I, then, come to these two tracks almost completely cold, not hearing them as covers but in and of their own right. Superfjord's Jussi Ristikaarto talks about wanting to preserve the 'bubbly and energetic' nature of 'Peaches En Regalia' and notes how the Zappa version has a soundtrack quality that they'd wanted to preserve in their interpretation, which sort of does my reviewer job for me, because their cut has the vibe of a funky and freaky 60s pop culture film, probably set in swinging Soho, all flowery shirts and flares, and people conversing in groovy metaphors... photographers and models, pop stars and groupies and not much plot but lots of running around London town, visiting little clubs that look like they've been set-up in someone's front room. Makes me smile!

Superfjord are, then, doing the light touch on their side; flip it over and immediately there is a different texture, with Sendelica - and guest vocalist Karen Langley - opening 'Don't Eat the Yellow Snow' with a sinister, forbidding entry into what becomes a heavy riffing, heavy saxophone, dense drumming, number, all grain and fuzz and wailing underneath a declaiming vocal, purposefully stomping one step at a time through the tune and out of the other end. Two sides, two very different takes.

Posted by Ian Abrahams at 15:44 No comments: