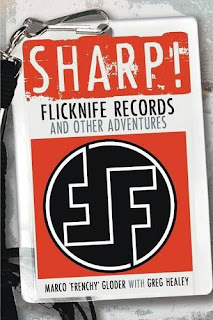 Following on from my review of Frenchy Gloder's Flicknife memoirs, here's a Q&A with co-author Greg Healey about this book and their collaboration...

How did this project come together?

About four years ago I received a message on LinkedIn from Frenchy to ask if I'd like to review the latest volume of Hawkwind Friends & Relations. At the time I was a staff writer for the Seattle based Redefine Magazine and, as I had been a Hawkwind fan and a Flicknife fan since my early teens, I suggested that I write a feature piece about the history of the label. I like to give context to feature pieces so, as well as covering the story of the label, I wrote about some of the political and social events that made the times what they were. Frenchy loved the piece and pretty soon after messaged me to ask if I'd be interested in writing a book about the label that would give a flavour of the times as well. As we talked it soon became clear that his life had been a fascinating roller-coaster ride and that, if I was going to write about Flicknife and the era the label came into being, I was going to have to write about the man and his story as well.

What are the mechanics of writing a book like this with someone… how did the collaboration work?

Once we decided to tell the story of the label through the life of the man we had find a way of conducting interviews that he'd feel comfortable with. We needed to hit upon a method that would allow him to remember things lost in the haze. A lot of the material in the book is deeply personal and at times tragic, and it became clear that the narrative would be best served if it was told from his perspective.  Along the way we tried Skype, face to face meetings and emails. It was an evolving process. The main challenge in all of this was to give everything a coherent voice, Frenchy's voice, and arrange it and tell it all in a way that kept the reader hooked.

I thought Frenchy’s personal story was bravely told, how soon in the project did it become clear that he’d want to tell his life story in this way, as opposed to being a book of music industry recollections?

Initially, Frenchy was very reluctant to include his own stories. His life has been about the bands, the music and the label, and it seemed counter intuitive to him to talk about personal experiences. What helped was when I suggested the idea of making it read like a novel; Frenchy saw the potential of this approach immediately. One of the biggest successes was that we formed a good relationship based on trust: once he saw that his personal life and experiences were going to be handled in a sensitive and not a sensational way he felt more comfortable. The idea that it was important to tell the whole story in the context of the times, so that Flicknife and its releases didn't appear to exist in a vacuum, appealed to him from the beginning.

A lot of readers will come to the book because of the Hawkwind connection. How difficult was it to strike the balance between the Hawk elements of the story and the rest of Flicknife’s eclectic catalogue?

One of the first things Frenchy said to me was "Let's not make it just about Hawkwind!" He is rightly proud of Flicknife's diverse catalogue and he felt that the label's other bands had often been overlooked. However, there are lots of good stories about Hawkwind in the book and it was good to get across Frenchy's perspective on those years in Hawkind's story too. Most importantly, for Hawkwind and all of Flicknife's acts, we wanted to give each story nuance and colour and bring them to life.

When we talked while you were writing the book, you were heading for a much larger word count but have had to trim down for publication. Do you have a favourite story that couldn’t be included because of the constraints of book size?

My favourite story is the one about the heiress, the kitchen knife and the bag of coke.

Any plans for making unused material available on-line or in another volume?

There is talk of a second volume. He has countless more stories to tell.

What are you most proud of in this book?

That it is a good and interesting read that tells the story of an era rapidly passing from memory. A lot of readers have said it's very evocative of the times and paints a vivid picture of the music and counter culture from the end of the 1960s through to the mid 1990s.

What was your first Flicknife record?

And your favourite Flicknife record?

Posted by Ian Abrahams at 18:13 No comments: 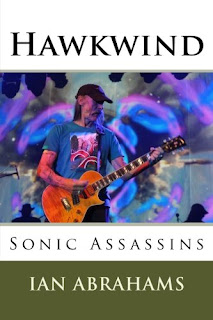 Posted by Ian Abrahams at 17:58 No comments: