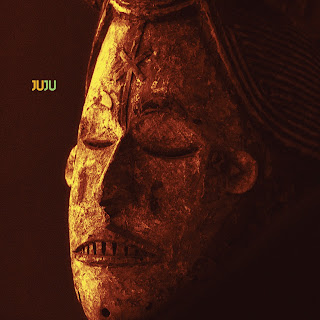 Out via Sunrise Ocean Bender

JuJu is the latest ritualistic incarnation of Sicily-based Gioele Valenti (Lay Llamas, Herself). Through the music, JuJu tells the legend of a continuing exodus from Africa that more often than not ends in ignored tragedies at sea, ‘a total defeat for humanity’, in a hybrid of modern influences rooted into a dark, enchanted form of primal music.

JuJu’s forthcoming self-titled debut doesn’t just suggest but screams spiritual moorings; the album itself is a ritual and is ignited by Afro groove rhythms, Kraut repetition, drone-fuzz coated psych riffs, Manchester scene shoegaze synth, prog-infused astral folk vocals and organs and almost tribal rock atmospherics. All the while with this is underlined with an ever apparent mythical, Mediterranean neo-paganism. Citing influence from African Earth magic, soil secrets and the inevitable ceremonial superstition associated with the band name, Valenti is channelling his personal apprehension and traumatic fervour of the current crisis through the warped sound of JuJu.

Over the course of 41 minutes, tracks such ‘Samael’ and ‘Sunrise Ocean’ nod heavily to the ritualistic sound of bands such as GOAT or White Hills and at times even Hookworms or Sonic Jesus. Whereas the more folk infused atmospheric areas of the album such as ‘Stars and Sea’ or ‘Dance with Fish’ can call to mind the ambient yet tension filled driving power of Heroin in Tahiti (think ‘Sun And Violence’). Elsewhere little nods to the likes of Wild Nothing or the War on Drugs can be heard in tracks such as ‘We Spit on Yer Grave’, whilst ‘Bring ’em War’ even flirts with the psychedelic revival sound associated with 80’s acid house. There’s a lot going on here, but the album never feels disjointed and it never feels as though it’s trying too hard. It’s still holds an entity of well-crafted songs, despite them appearing very contrasting in style.

After supporting GOAT on tour, Valenti took the time out from Lay Llamas to produce this primitive and otherworldly documentation of songs. Speaking about the album, he said:

“I wanted to develop some themes [from] the previous experience with Llamas… the link with Mother Earth, the theme of lysergic trip, symbols of Black Magic and a strange ancient grammelot that I call Ramanna. JuJu, besides being my personal point of view on the current Mediterranean exodus tragedy, of people and culture lost at sea, is even more of a solid tribute to the music I’ve always loved… Joy Division, Can, Neu!, Mercury Rev and many others.”

The proficiency of both the instrumentation and Gioele Valenti’s lyrical rendering that make up this self-titled debut demonstrate that JuJu are more than the animalistic, tribal cousins of associated acts Lay Llamas and Herself – they are capable of proving themselves as a band in their own right, and not another incarnation of Valenti’s. Albeit that they seem to encompass that ceremonious and spiritual sub-current, something new and intriguing.

Take an amulet – join the cult.

Posted by Ian Abrahams at 11:07 No comments: 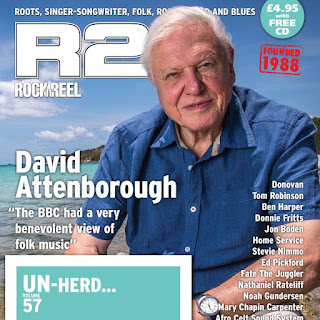 I wasn’t looking forward to reading this book, to be honest. The cover, typesetting and general layout are a computer-generated mess of fuzzy images and jumbled styles. But I sat down and started reading, and reading, and I was quickly drawn into a warm mud bath of circled tents and vehicles, guitar noise everywhere, smoke, fire, and all-night conversations.

It’s a great book, in fact. With little running commentary it gathers the words of a huge cast of people, - famous, infamous, and not-at-all famous – and allows them to tell the fascinating history of the UK festival scene from its first stirrings (hippies, tipis, and bits of scaffolding pole), through its wayward, unexpected and shocking journey (countercultural takeovers, Hell’s Angels, punks, media fame) and eventually to its fizzling-out, slumped in a corner of a field on a horrific come-down after a night where nobody was sure if Hawkwind actually turned up and played or not. Or, in the case of a particularly nasty festival at Telscombe Cliffs in 1990, whether Hawkwind had managed to get out alive.

It's an amazing narrative, a classic tale of rise and fall, and the way it’s told by all the different voices makes it hum with the truth. When I was a kid in Lancashire I went to the annual Deeply Vale festivals, firstly as a cynical young punk but gradually recognising the love and effort – chiefly put in by ‘the hippies’ – that went into building the festival scene, in creating an outside phenomenon that could be fun, wild and beautiful whilst being everything that parents and politicians were scared of… let’s hear it for live music, fires, drugs, and sex!

This is a book whose story is ultimately sad, since its punchline is a summerful of ‘boutique festivals’ fleecing huge amounts of money from the wealthy end of the middle class in their fancy wellies hoping to catch some American R&B diva on the main stage. But within this history of the festival scene there is a huge amount of love, of community, of defiance, and of hope. And that’s a story worth telling.

Posted by Ian Abrahams at 17:40 No comments:

Really pleased to see that The Bevis Frond reissues have moved to Fire Records, with the following albums being released on 29th July 2016.

“Within such an impressive body of work, New River Head is certainly the crown jewel. One of the headier agglomerations of the past decade, it’s non-grasping pace and epic palette issue the breezy confidence of an unmistakable classic” Pitchfork

“The perfect point of entry into his catalogue”(Popmatters),‘New River Head’ is the second studio album and seventh full length release which is widely regarded as the finest.‘The Miskatonic Variations II’ is a 17-minute psychedelic noise rock odyssey with exhilarating guitar solos and features guest vocals from Current 93’s David Tibet. ‘Undertaker’ and ‘Chinese Burn’ bursts with garage-rock and ‘Waving’ delves more into British folk-rock territory.

‘New River Head’ is released on double vinyl with gatefold sleeve and CD alongside ‘Any Gas Faster’ and ‘London Stone’ which are released in July 2016.

“The main strength of the Bevis Frond is the exquisite songwriting, with pithy and poignant lyrics delivered in a very uncompromising English roots accent. Artists such as Teenage Fanclub, Elliott Smith and Mary Lou Lord have covered their songs, while he’s played with Current 93, The Hawklords, Oneida and Arthur Lee of Love, amongst many others.” The Quietus

Originally released in 1990 ‘Any Gas Faster’ on Reckless Records, the album features fellow Room 13 musician Martin Crowley on drums and with Nick on everything else. Replacing his trademark epic guitar workouts in favour of more song-orientated psychedelic rock.

“The fourth ‘proper’ Bevis Frond album and the first to be recorded in a ‘proper’ studio’… the title came from an advert I wrote for industrial gas when I was a trainee copywriter at an ad agency” Nick Saloman, Hastings 2016

The ‘Any Gas Faster’ reissue includes bonus recordings from one of The Bevis Frond’s first gigs as a band recorded in Copenhagen supporting The Hothouse Flowers – these tracks are taken from EP ‘Ear Song’. Also included are tracks from ‘Acid Jam’ (CD does not include Acid Jam).

Lost masterpiece ‘London Stone’ (1991) was the follow-up to ‘New River Head’. Opening with traditional violin piece ‘Stonedance’ by Barry Dransfield it leads into the impressive ‘Coming Round’. “That Same Morning” ‘can stand proudly beside contemporaries like Teenage Fanclub’ (Pitchfork) whilst ‘Living Soul’ sees Saloman waxing Hendrix and ‘Lord Of Nothing’ revisits the folk rock side of Nick’s song writing.

The ‘London Stone’ double LP and CD reissue includes bonus tracks ‘Another Song About Dying’, ‘Coming Around (demo), ‘Scavenger’, ‘And Now She’s Gone (demo), ‘I Am Just A Child’ and ‘Hail The Child Philosopher’.

Posted by Ian Abrahams at 18:00 No comments: 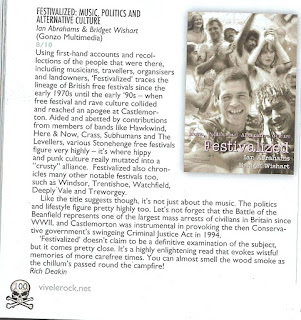 Posted by Ian Abrahams at 19:00 No comments: 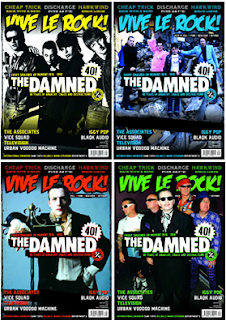 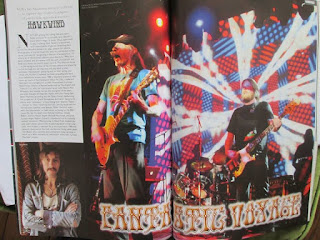 A few Hawkwind bits and pieces of note... I was going to write up their Islington Academy gig from the enthusiastically received The Machine Stops tour, being the only show that I got along to from this set of gigs, but that was a couple of weeks ago and there's been a lot of very positive reviews appearing across the Internet and in print, so I'll just say that I enjoyed it immensely and concur with others who are marvelling at the job done by new bassist Haz Wheaton.

Instead I'll mention that Vive Le Rock's latest issue, with its multiple covers featuring The Damned in support of Dick Porter's excellent history of their 40 years - including I'm impressed to say, an interview with Dave Vanian who is usually more illusive than the Scarlet Pimpernel himself - also has a six page feature from myself on Hawkwind, based on an interview at rehearsals for Hawkeaster a couple of months back. Dave Brock, Dibs, Richard Chadwick, Niall Hone and Haz Wheaton all appear in this one, a mix of the present and the legacy, a piece that I'm quite proud of and all wrapped up with a glorious live photograph from Oz Hardwick, as seen in the snapshot above. In shops now.

Other Hawk stuff: I interviewed Dave towards the end of last year for the website Louder Than War, and his choices for his Top 10 favourite(ish) albums can be found here. Meanwhile, over at Record Collector's website they currently have my review of The Machine Stops. And finally, a mention for Jason Heller's excellent Hawkwind article in the SF magazine Clarkesworld, which I really enjoyed and was most chuffed to find mentioning Sonic Assassins on a few instances.

Posted by Ian Abrahams at 18:59 No comments: