Following last year’s re-emergence with Instrumentals 2015, three of Flying Saucer Attack’s most revered albums - Distance, Further and Chorus – are to be re-issued on Domino on March 18th 2016.

David Pearce re-materialised last year with the beautiful Instrumentals 2015 and attracted all manner of attention - as one does when one emerges from self-imposed exile holding a glittering prize. Without warning he became part of the musical landscape once again, heralding a new phase of the project he initiated in the early 1990s. Interviews and retrospective features assessed his importance in the continually unfolding story of British music, referring back to the music contained within these three artifacts, which sound as untainted - even more so, in fact - as they did on their initial release.

There are many that believe the concept of electric folk to have died at some point in the 1970s following the heyday of bands and artists such as Fairport Convention, Roy Harper and John Martyn. These three reissues give the lie to that commonly held misconception. For while Distance, Further and Chorus do not cleave all that faithfully to the folk rock template established by the electrified rovers of that supposed golden age, and incorporate elements absorbed from musics as varied as krautrock, drone and dub, they can be considered in that lineage, with its Arcadian attitude to the unsullied landscapes of Britain and romanticised idea that old traditions may, at some point, produce something fresh and unheard.

All three are essential listening for those who are still capable of dreaming even as our dreams are co-opted and second guessed in a digital era which is revealing itself to be monstrously voracious and venal. Distance, Further and Chorus open up spaces in the mind where one may wander at will, Pearce’s excoriating feedback serving as a dream weapon designed to cleanse the grit from the mind’s eye. The melodies beyond the noise reassure us that it’s okay to take this route away from the superhighway and explore paths trodden only by a few, Pearce and collaborators included. This may be derided by some as escapism; rather it is parallelism. The search for alternatives, when the very term ‘alternative’ has been devalued beyond all recognition.

Each of the three albums come in a 20th Anniversary Vinyl Repress format, cut in 180gm heavyweight virgin vinyl from original masters by Matt Colton at Alchemy. The albums will also be available on CD & digital formats.

Posted by Ian Abrahams at 12:06 No comments: 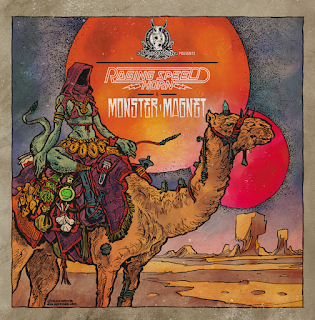 Corby sludge demons Raging Speedhorn are set to appear on a split EP with US Stoner Overlords Monster Magnet as part of the bands’ appearance at the British Desertfest.

The Desertfest sponsored 7” split will be released by H42 Records on April 29th, the first date of the festival, with a limited vinyl pressing of 300.

The track listing is:
Side A: Raging Speedhorn - Halfway to Hell
Side A: Monster Magnet - Hallucination Bomb

Guitarist Jim Palmer had this to say on the release:

“Having been a fan of Monster Magnet, forever it’s a real pleasure to be part of this split record! We also feel tremendously honoured that Desertfest chose us, as we are big fans of the festival. It doesn’t much better than this!”

Raging Speedhorn are currently in the studio with Russ Russell finalising their fifth record, which is set for a mid-2016 release.

Posted by Ian Abrahams at 11:57 No comments: