It's taken a while since the book was originally conceived - to say the least - but thanks to our friends at Gonzo Multimedia, Festivalized: Music, Politics, Alternative Culture is now out in paperback as well as the eBook edition that was released in November.

And we have our first Amazon review;

""From the horse's mouth". A history that absolutely needed to be told, and an absorbing and fascinating read - an excellent book."

You can order the paperback from Amazon (it currently says 4 - 6 weeks shipping, please ignore, they are shipping copies as of now) through this link:

or the eBook at Amazon is available through this link:

If you're an Amazon customer who can give us a review, that's always very welcome!

Gonzo Multimedia also have the book available and are shipping copies currently, and you can buy the paperback (though not the eBook), here. The eBook is also available from Smashwords, where you can also download a free extract first, iTunes and other digital book retailers supplied from the Smashwords platform.

It's been a labour of love - hope you like the end result!

Posted by Ian Abrahams at 14:21 No comments:

News: Sendelica Announce New Studio Album - I'll Walk With The Stars For You 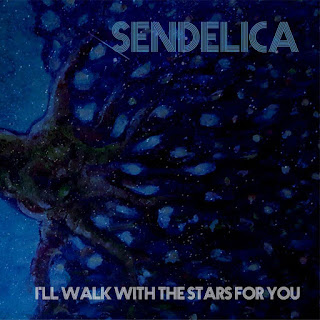 Welcome to a brand new year and the 10th anniversary of Sendelica! We are really proud to unveil the opening track, 'Black Widow Man' from our first release of 2016:

Posted by Ian Abrahams at 16:16 No comments:

Magnetic Seasons sees MUGSTAR shifting through a whole range of newfound sonic gears. Recorded at Liverpool’s Whitewood Studios, the band approached the Magnetic Seasons sessions in an extended and open manner. Allowing time and space to experiment, improvising and feeling their way through playing, this free approach and method of working resulted in an extended body of material; nine intense and atmospheric soundscapes moving across an expansive and distinct four sides of vinyl.

With fresh layers and swathes of texture stretching out a much broader aural vocabulary than is often permitted during their explosive live shows, Magnetic Seasons is a game changer for MUGSTAR. Not just in terms of length, but in its fluidity and its breadth of moods and emotions locked within the songs. Lead track ‘Flemish Weave’ is a two-headed beast, drawing the listener in with intricate finger-picking, immersed in waves of sound before dropping effortlessly into a simultaneously tight and expansive psych-kraut groove. Where tracks like ‘Sky West & Crooked’ see MUGSTAR at their most mellow and laid back, with a Fender Rhodes blinking beside dusty guitar lines that float up into a soothing dream-like haze. Not to mention the engrossing, side-long, closer ‘Ascension Island’, an extended piece of improvisation and instantaneous composition. “On playback, it was apparent that this track had a life and trajectory all of its own. It felt organically right and complete immediately. Somehow it produced atmospheres that seem to embody a sense of eeriness, and yet be seductive and embracing all at the same time”, the band explains.

Underlying these forays into their bottomless cannon of creativity, MUGSTAR’s trademark rhythmic drive is ubiquitous as ever. Albeit in more subtle and muted guises, the overall effect of Magnetic Seasons emerges as being one that is ultimately engrossing and captivating.

MUGSTAR have been playing, performing and recording since 2003. Their tireless work ethic and astonishing, internationally renowned, live performances have earned them a much deserved status as cult heroes. Their first single ‘Spotlight Over Memphis’ caught the ears of late and great radio legend John Peel, who later went on to record them as his last-ever Peel Session in 2004. A subsequent string of singles, EP’s and several full-length albums make up the band’s back catalogue, not to mention a split release with Mudhoney.

2015 also saw a particularly busy year. With the release of Start From Zero, the hugely anticipated collaborative LP by MUGSTAR and Damo Suzuki (from legendary krautrock band Can) on Important Records, recording what has become Magnetic Seasons, playing Austin Psych Fest and completing a tour of the USA. 2016 will see the band will play the following UK dates with a full EU tour soon to be announced.

Posted by Ian Abrahams at 16:20 No comments:

Hello everyone; a very quick post to link to a couple of radio interviews that I've recently done to talk about Festivalized and the free festival scene.

Firstly I was at Radio Cornwall yesterday to talk to Tiffany Truscott on their afternoon show, which is currently on 'Listen Again', I would think for the next six days:

And I've been chatting with Gonzo's Jon Downes for their website:

Do have a listen! Print copies of Festivalized will be shipping in the next few days and the eBook is available from Amazon, Smashwords, iTunes and other digital sellers right now.

Posted by Ian Abrahams at 16:43 No comments: