A Farewell To Lemmy

I saw Motorhead only once – at the much missed St Austell Cornwall Coliseum – and as far as I can remember I only ever owned one of their LPs, No Sleep ‘til Hammersmith, though I’ve heard many over the years and always held a soft-spot for Ace Of Spades in particular. So when I think of Lemmy, it’s usually for the Hawkwind connection and in writing this blog, it’s not, then, to talk about his whole career, which of course stretched back into the 1960s, and for which there are so many obituaries today, but to reflect on his importance to Hawkwind during his tenure, and the legacy that he’s left them.

Think back to the very early albums, Hawkwind and In Search Of Space and they are distinctive and distinct entries into the catalogue; calling cards with differing messages and classic albums in and of themselves. Both, in their own ways, are fantastic records. And I guess it’s entirely arguable that In Search Of Space, in its production, is more advanced than what came next. But what came next was Lemmy, an unarguable force of nature riding his bass lines like the Silver Surfer on acid, a rollercoaster balanced on its tracks but twisting and turning, looping and pushing forward, twisting, turning and looping again, free spirited but in service to the whole as well. I mean, Simon King is a key component of that sound as well, but that period of Hawkwind is about Lemmy and the way which he and Dave Brock coalesced the idea of a rhythmic, driving, powerhouse space-rock that defined the musical content of Hawkwind across Doremi Fasol Latido, Space Ritual, Hall Of The Mountain Grill and Warrior On The Edge Of Time.

I wrote about ‘Brainstorm’ for Shindig! when they did their space-rock special a couple of years ago and identified, as so many have before, that meshing of musical comradeship: “Though ‘Brainstorm’ is Nik Turner’s first solo credit on a Hawkwind track, and his lyrics lean the band almost in to territory that might retrospectively be described as ‘cyberpunk’, the musical story that ‘Brainstorm’ tells is of the definitive guitar and bass Hawk line-up of Brock and Lemmy gelling together in what they’d both come to recall as an empathetic and intuitive partnership and, alongside Turner’s wailing sax, that collision of sound not only created one of the great space-rock classics but setting the texture and tone of the classic Hawkwind sound. It has a great mythology and mystique to it – great versions abound, the pulse-pounding Live 79 blast-through, the dark and mysterious Space Ritual rendition and its original Doremi… album appearance with its at times almost ethereal vocal delivery from Turner.”

On Doremi… though, there’s also Lemmy’s own first solo credit for Hawkwind, on ‘’The Watcher’; pensive, brooding, thoughtful, involving. I was playing it recently, listening out for that great lyric that seems to me to rally against the futility of boredom in a proto-punk manner: ‘where I come from no-one smiles/every inch exists in miles’ and was astounded not to hear it… but it’s not on Doremi… an addition in the live set, as heard on the 1974 American  live album. It adds another dimension, a different texture, to the dense songs around it, and really is a strong argument for Hawkwind’s influence on punk even though it’s quite removed in sound. 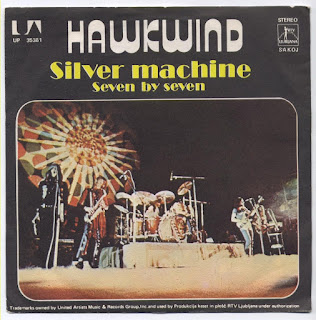 ‘Silver Machine’, that timeless Brock/Calvert number, had of course been in the Hawkwind set for a few months, Calvert on vocal duty when available, before Dave Robinson, future Stiff Records boss, identified its potential buried in the tape of their ‘Greasy Truckers’ Roundhouse gig in February 1972 and highlighted it as something special, with Lemmy overdubbing the vocals at Morgan Studios, where the sprawling original was cut and distilled down to its 7” release. One reviewer might have claimed at the time that “the vocals are so submerged in the thudding, whirling sound that they are largely irrelevant,” but it’s that growling delivery set against the grungy guitars, all around the kit drumming, and spacey electronics that turned that song into a perennial, known to the many who don’t know it’s Hawkwind and don’t realise – how could they not – that it is Lemmy. It’s a piece of magic, atypical of Hawkwind in some respects, but a stone cold classic.

I posted on-line in one comment thread today that those familiar with Lemmy only through Motorhead should listen to Hall Of The Mountain Grill and discover the more nuanced playing that Lemmy delivered there. I later reflected on that as not really being correct, because you can hear it on something such as ‘1916’, music with intelligence and thought that transcends the public image. But on that Hawkwind record you get the most proper understanding of what he brought to the band. It’s a sharp blend of heavy rocking and sympathetic playing, taking joint control with Dave Brock of the really big songs – ‘The Psychedelic Warlords (Disappear In Smoke)’ and ‘You’d Better Believe It’ – but adding something more subdued on things such as ‘Wind Of Change’. ‘Lost Johnny’ is, of course, one of his own, co-written with Mick Farren. I was fortunate to able to ask Mick Farren about this one and have added his comments to the new edition of Sonic Asssassins: “It’s Lemmy’s song. It was written for Lemmy, for Hawkwind. They were doing Hall of the Mountain Grill and Lemmy was concerned he wasn’t going to get any songs on to it, so I said ‘Let’s write one’. I had this idea about all these loser characters, of which we knew many, looking for drugs and ‘baying at the moon’. I mean, it wasn’t Terry Ollis and it wasn’t Steve Took, and it wasn’t nine other people ... it was a combination of all of them, or seven versions or whatever it was. I put it down on a piece of paper, handed it to Lemmy and he took it away and put the music to it and came back and we changed a few things and that was ‘Lost Johnny’. I can’t sit down with a guitar, a blank mind and somebody else and come up with a song. I usually have to go away by myself and write the lyrics, and that song was no exception.” But he’d also told Alan Burridge years previously how: ““[Lemmy] said, ‘Hey, you got any lyrics?’ and I said yeah, and we wrote ‘Lost Johnny’.” Farren and Lemmy wrote a handful of other songs together, when Lemmy was assembling his band Motörhead, but the writing partnership “faded away, because Lemmy started writing his own lyrics with great fluidity.” 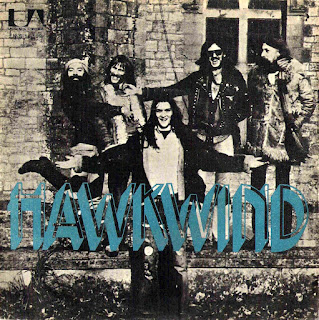 Then there is ‘Motorhead’, the B-side of ‘Kings of Speed’, complete with violin break, but despite that a pointer to where Lemmy would be going once he was ejected from the band. Would he ever have left on his own accord? He’d suggested not in the past and indeed when asked why he made so many guest returns afterwards he’d simply responded ‘because I can’t resist it’. And I wonder if that was how he was afterwards, elevated to National Treasure status and at the helm of a band that eclipsed Hawkwind in terms of record sales and recognition (achieved in no small measure I’d suggest, from working with Dave Brock and learning what it takes to put together and sustain a band), but still looking backwards with a fondness and nostalgia and appreciating what Hawkwind had been for him as his career developed and his profile expanded. He’d never have thought in that term of course, it wasn’t a career, it wasn’t even a way of life, it was what he had to do.

What was his legacy to Hawkwind? Well, it was in bridging the gap between their hippie roots and their biker following; no surprise that once punk had burst across the music scene that he’d be adopted by that scene. He was a talisman for Hawkwind in that period, when he’d been such a major part of defining their sound even though that time was quite brief in the context of all the years the band have continued onward. He seemed to be someone who just went on; Captain Sensible once told me how Lemmy was always nicely topped up on his favourite Jack Daniels tipple but never drunk. He loved the rock star life, bought into some of its excesses and mantras for sure, but he seemed to transcend it, to walk over it with impunity where lesser people succumbed to it or were enslaved by it. Small wonder then that he had to be ‘Killed by Death’… rock ‘n’ roll could never have seen him off.
Posted by Ian Abrahams at 17:33 4 comments: