Looking forward to The Waterboys at Glastonbury? Price drop on the Amazon Kindle edition of 'Strange Boat - Mike Scott & The Waterboys' for the rest of June. Read it at Glasters - or anywhere else for that matter - for 1.99! Then I'll afford a hair cut!

Posted by Ian Abrahams at 17:03 No comments:

“Italian afro-funk psychonauts touch down in the Roundhouse temple,” says Dave Weller of 4Zero Records, in his opening description of the latest release from his label. “Originally, in the distant future, a mythical tribe of Nigerian time travellers... now an Italian afro-funk-space-psych outfit. Last year they released their acclaimed debut album, Ostro, on Rocket Recordings and toured the UK in support of Swedish voodoo rockers, Goat, culminating in an unforgettable performance at London’s Roundhouse. Captured on digital multi-track the subsequent recording was just too good to only be shared with ‘friends and family’ and so we are making it available as a highly limited CD and a highly unlimited download, that includes a unique prismatic remix.”

They’re a Sicilian duo, Nicola Giunta and Gioele Valenti, though they’re backed here in a live context by guitar, drum and synth, playing an addictively repetitive primal trance fusion thing that has something mystical at its core, something mystical in a primitive sense, invoking old gods and delving deep for a sense of groove rooted in instinct and freeness. Dave is right, of course, a live set far too good to not be made more widely available. ‘Spiritual Expedition’ they declaim as one of the track titles, a thoughtful and understated, angular yet intoxicating, drift where the restrained but insistent drum patterns push along a soundscape that mostly wants to hide itself in the background, emerging occasionally from its undergrowth and then burying itself back into itself again before swishing out into ‘Something Wrong’ with Nicola’s singing chanting vocals akin to a ritualistic camp-fire sermon.

Before that, the mid-point of their Roundhouse set assuming that the album represent the full swathe of the performance is the scene-setting jungle squawking of ‘Overmind’ and ‘Beyond The Time & Space’, into which they insert the opening wash of synths, communing with nature, building up gossamer-thin layers of sound that shimmer into their rainforest of effects. It’s an entrancing start that luxuriates in the expanse of time in which they allow it to grow and develop, nearly six minutes before it starts to become more forceful, more robust, hinting that they could let it loose in a muscular release but keeping it held-back, keeping it crystalline and fragile. They play that bit out in transporting their audience back to a supplication to those old gods or pagan calls, and then let loose their groove with ‘Archaic Revival’, a funky call to dance and movement that wants the audience to respond as one, as a tribe with single purpose.

It’s all long-form, extended music. Each track takes its time to build into its theme, their tunes all having plenty of space to work within – no walls of sound but instead a sense of freedom where they give each other a massive amount of room to play in. ‘The Place Where We Come From Is The Place Where We’re Going To’ its final expanse, eighteen minutes that starts at a sloth’s pace and a tribal dance’s sense of destiny and purpose, a world music with a satisfying range that reaches a crescendo of sorts, a flickering of bodies in unison around a fire, the flames licking upwards and the bodies flowing around it before ending in an off-kilter reverb appropriately coiling the suite back into itself again.

Posted by Ian Abrahams at 19:15 No comments:

So the fabulous conceit driving this record is that The Velvet Underground & Nico was not a seminal and acclaimed work of the mid-60s, but actually a bloody good surf-rock instrumental record by some guys calling themselves The Otter Sandwich. It’s completely different of course, with the titular names reversed and the running order set back-to-front, and they’re no longer The Otter Sandwich, but are in fact The Kettering Vampires, but of course it’s a surf-rock LP. How else would The Jesus & Mary Chain have recorded ‘Cherry Came Too’ if it wasn’t?

‘European Sun’ becomes, then, a classic Californian or Hawaiian dream, angular guitar twangs and cascading drums but it can’t be that simple and ‘The Black Angel’s Death Song’ is sombre squelching keyboards with some suitably tongue-in-cheek squiggles over the top that segues into the L Ninja Snake (yes, honest) guitar-led ‘I’ll Be Your Mirror’ and some more honest to country twanging of ‘There She Goes Again’. ‘Heroin’ is 15 minutes of stone-cold serious Krautrock played by Orchestral Manoeuvres in the Dark circa Architecture & Morality during which I notice the iTunes banner says it’s ‘The Experimental Surf Music Tribute To The Velvet Underground & Nico’ whereas, this track aside, it’s just great surf’s up stuff. But then, I’ve been playing it in my car in what’s passing for the Cornish summer. Catch this wave, I’d be surfin’ on top of the world, man.

‘All Tomorrow’s Parties’? A Big Country-esque spaghetti soundtrack wherein Mr Ninja Snake plays the part of Hank Marvin, guitarist of this parish. Or the delightfully 50s sweet ‘Femme Fatale’. ‘I’m Waiting For The Man’, a Stranglers opening instrumental with the Men in Black in a good mood and it's ‘Sunday Morning’ having been played to the JAMC once and the brothers Reid asked to re-create it from the notes they’d made while listening. I'm Hanging Ten on my Big Wednesday because this is my summer's Pet Sounds, right?

Damned and Damned some more

First Damned bit of this blog; a heads-up that I’m interviewing the great Brian James in the current issue of Vive Le Rock magazine, talking about his terrific new solo album The Guitar That Dripped Blood and generally chatting about his other recent solo work… and checking with him which bottle of wine would make the appropriate soundtrack to his latest record. Easy Action Records have Brian’s solo records on sale here including a handy bundle of his previous albums. Tell all your Damned friends! 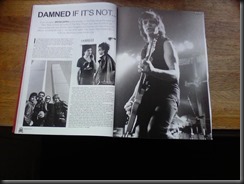 So that gives me a neat neat neat segue into mentioning a new creator-owned comic by my old mate Paul Cornell, This Damned Band, which is nothing to do with The Damned I should point out but is a six-part mini-series from Dark Horse Comics that tells “the story of Motherfather, global rock superstars of 1974.  Like several prominent musicians of that era, some of the band like to intimate that they, you know, worship Satan.  But then they discover they’re actually, you know, worshiping Satan. This Damned Band is a somewhat cruel comedy/horror six-issue miniseries, definitely not for children, told as if we’re seeing a documentary movie that’s been pieced together by a film crew.  So there are interviews to camera, sections where ‘filmed footage’ is replaced with ‘artist’s depiction’ to render the subjective experiences of drug use, questions from out of frame.  One of my favourite shows is Parks and Recreation. I love that specific use of the documentary mode, where one can get reactions to camera and see intimately the gap between what people say and what they mean.  So, obviously, when writing a dark comedy about how mainstream the occult was in the 1970s, P&R was a major influence.”

Really looking forward to this one! Pre-order it with your local comic book store!

Posted by Ian Abrahams at 09:06 No comments:

I was enthusing about Electronic Memory, Mega Dodo’s Crystal Jacqueline and The Honey collection in Record Collector recently, a collection of songs, some of which had previously had appeared on vinyl via Fruits De Mer, just as I’d enthused about Sun Arise, Crystal Jacqueline’s first solo album back a couple of years ago in R2. What’s next is Jacqui’s newest solo recordings – of course in tandem with Icarus Peel – and after all that previous enthusing… well, here’s another record from deepest Devon to enthuse about!

Though it’s still infused through with that hazy 60s psychedelia that they’ve totally captured with such a delicate, light touch in their recordings, Rainflower feels like a more sophisticated, more grown-up record. Partly that might be because there’s more original material on this record than earlier albums, with Icarus’s song-writing in the ascendancy; perhaps they’re buoyed by the great comments both Crystal Jacqueline and The Honey Pot are getting both in print and across psych-related websites. I hope so. There’s a couple of great covers: Status Quo’s ‘In My Chair’ really bursts out, a much rock-driven track than we’re used to hearing and quite startling in its exuberance, and a rendition of the Floyd’s ‘Grantchester Meadows’ that’s also part of FdM’s ‘Momentary One’ 7” single that Ian McCann was reviewing in Record Collector recently.

But what’s great is the way that Icarus and Jacqui are stretching their creative legs and pushing, bending, their sound in different directions. ‘Siren’ is dark psych-folk, shimmering and unsettling with Jacqueline’s vocals being a, well indeed, siren call, imploring, tempting, dangerous. It’s a compelling track with its urgency at the fore. ‘Winter Deep / Dress of White Lace’ an opus, with Mordecai Smyth sharing writing credits, a cleansing and dreamy drift out of the darkness where the Winter is a frosty sharpness described by beautiful vocals and beguiling guitar playing that gives way to a Floyd-ish second half that applies a background of what I’m going to describe as idyllic looseness, that then wraps itself around a delicious and redemptive vocal.

The title track is summer afternoon after a thunderstorm, that perfect quality of air when everything feels renewed and refreshed. ‘Strange Bloom’ is an elusive and hypnotic trip that expands out into another heavier track, and ‘Again… Dragonfly’ is a mystical soundtrack that allows Jacqueline to put some power into the vocal delivery and add that extra bit of magical majesty to the evocative words. All the promise of Sun Arise confirmed and and built on.

Posted by Ian Abrahams at 19:22 No comments: