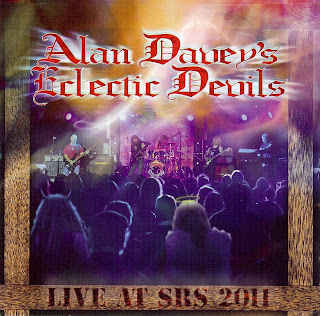 I’ve often thought that one of the downsides of solo albums by musicians who are more commonly thought of as band members is often the lack of opportunity to hear those songs and that music played in a live environment, since it can be the case that such LPs are distinct from the musician’s more regular line of work, side projects or muses that satisfy a specific creative urge or are in and of themselves standalone pieces that might be there to explore at a tangent ideas that don’t fit into the usual format that any particular artist is usually to be found working. It might be that the sheer logistical and financial challenge of touring a solo record is out of reach or that the timescales simply do not allow it to happen.

Regular visitors will, again, recall that I’m a huge fan of Alan Davey’s work, whether in Hawkwind, with his former outfit Bedouin or in his more recently revived ‘original’ band Gunslinger – and of his solo albums, and as such this live album, recorded at the 2011 Sonic Rock Solstice festival is a really delight because it does touch upon songs that for one reason or another it seemed unlikely would get an airing in public, but here they are in a put-together for that occasion band that included then Gunslinger guitarist Louis Davey and drummer Cat Bothwell, along with Jus Forrest and James Hodkinson... Eclectic Devils all, no doubt!

I’m not clear whether the nine tracks included here encompass the full set played at SRS last year – anyone who knows, please leave a comment – but this release has been mooted ever since and is very much worth the wait, culling songs as it does from several elements of Davey’s career, including Hawkwind and solo album numbers. I’d guess in part it serves, for some songs, as a shout-out as to how Davey envisages the original versions should have sounded; ‘Greenback Massacre’ in particular. Some are reinvented for his collaborators strengths here, in this instance then the brooding and tribal ‘Wings’ is both majestic and plaintive at the same time, and ‘Sword of the East’, for want of a better expression, simply kicks ass as never before, a pounding and extremely heavy take that blows away other occasions where Davey has picked up and reworked this one. In the same way, ‘World of Fear’, from the album Human On The Outside, and ‘Angel Down’ from Eclectic Devils, are dense, grinding blasts that exude strength and menace. Play fucking loud is the underlying message here – turn that dial right up.

Back to that thing of songs from solo albums not getting the airing in public that we’d hope for; I’d love to see this sort of thing becoming part of Alan Davey’s regular work. Much as I like everything that’s been selected for this gig, I’d have wanted to pick ‘Sunray’, or ‘Encounter’, or ‘Delusions of Ganja’. I’d have hoped to see on the set-list ‘The Call’, ‘or ‘Chasing The Dragon’. Others will have their own wish-list for sure, so I mention those tracks to highlight strength in-depth (and doubtless the difficultly that was had in selecting the songs that did make the list) and just to note a few that I’d like to hear in this format. No matter that those numbers didn’t make it this time around, let’s hope that the summer festivals of 2013 might also reverberate to Davey’s songcraft and that neglected classics can cut through the British summer evenings again.

Pick of the album: My heart says ‘Sword of the East’, which has been one of my all-time favourite Hawkwind tracks since The Xenon Codex and which is really done justice here, but the slow build into ‘Pre-Med’, with Bothwell’s precision sharp militaristic drumming bursts leading into the song’s heavy riffing and extended relentlessness is just pure, driving, space-rock at its best.

Posted by Ian Abrahams at 16:20 No comments: