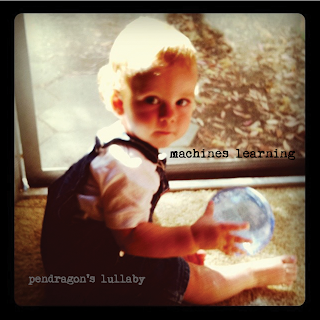 I’ve been alerted to this six track EP by Machine Learning’s guitarist/vocalist Paul Balmer, one third of the band’s line-up alongside bassist Bradley Botbyl and drummer Mario Quintero. Can’t tell you much more about them, but they tag themselves as akin to Smashing Pumpkins (with justice), shoegaze and space-rock among other things, and as San Diego so I’m guessing that’s where these folks hail from. What they play is a glorious mess of noise and melody, all fuzz and distortion playing across something sweeter. Remember when Jim Reid claimed that he didn’t realise that the Jesus & Mary Chain were making so much distortion and that he thought he was singing like a bird? (Yeah, right). Well, that’s something of what happens with Machines Learning.

The contrast is in the switch from the noise-fest of ‘Bulletproof Tiger’ and ‘Punching The Rabbit’, frantic conflagrations of sonic attacks meshing themselves over Balmer’s vocals, and the cleaner sound of the title track with Bobyl’s determined, dominant, bass lines as it switches from its rough-hewn but un-fuzzed origins into another tightly played melodic cacophony that Billy Corgan himself might have been proud of. ‘satAMcoffee’ delves, probes, even deeper into gritty denseness while Quintero gets particularly punchy on ‘010710’, another one that sharply blends its dual characteristics of grunge with melodic underbelly and, again that Pumpkins analogy, sits square into Machina/The Machines Of God territory, which makes it exciting and very worthwhile in my book.

‘This Destroyed Me’, plays it all out with a pensive, haunting and melancholic mood-swing that lingers in the mind and adds substance and atmosphere to what’s gone before it. Very Smart Stuff.

Posted by Ian Abrahams at 19:27 No comments:

Oresund Space Collective – Give Your Brain A Rest From The Matrix 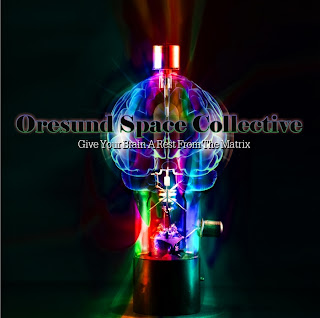 Regular blog followers will undoubtedly know the score with Oresund Space Collective who are a revolving group of space-rock musicians from, variously, Denmark, Sweden and America, with Scott Heller taking a pivotal role and this time out including Steve Hayes among the musicians involved. Scott gets over to the UK on a semi-regular basis for the same concerts as I'm always aiming to attend and very rarely actually make so though we've corresponded across the ether I've never actually met him – though we were in the same bar at a gig in Oxfordshire a few years back and didn't realise it. I'm looking forward to catching up with him some place, some time, but in the meanwhile there's always his great CDs to look forward to and the latest batch brought this new OSC recording and one that Scott's had a hand in recording and mixing by Danish 'space psychedelic krautrock band' Troldmand – Live At Loppen – which I'll write-up over the next few days.

OSC's Give Your Brain A Rest From The Matrix notes itself as being a call-out to people to disconnect from the smart phone Internet generation and kick back with relaxing sounds instead. Seems sound advice to me and this collection of four extended improvisations is exactly what the doctor ordered to slip out of the pressures and demands of the modern workplace and society and get lost in some psychedelic travelogues that takes us to Eastern, Far Eastern and Interstellar head spaces.

These are tracks cut back in September 2010, during the sessions that also conjured up their Entering Into The Space Country and Phaze Your Fears albums, albeit with modestly different line-ups contributing to the free-flowing jamming that is the OSC modus operandi. As always, there's a looseness to the playing on these tracks that allows the various players to follow their muses around a central theme or idea, or just a particular tone, and it's that sense of aural exploration and freeness to take a tangent or a deviation from the starting point that creates such a meditative luminance to their work. The title track has an Eastern flavour to it in principle but it that flows in and out of what they're playing so that it's a texture without being an overpowering 'flavour' to the music. On first hearing it I pegged it into having something of It Is The Business Of The Future To Be Dangerous about it and yet when I sit down to write about it with it running through my computer speakers I hear it differently and wonder where that notion derived from – and then it's shifting sands and perhaps that notion on another listen in another context on a different day would resurface.

I think that's what's so captivating and interesting about the OSC works that I've heard over the last few years, that spirit of improvisation and following where the music leads somehow becomes imbued into the pressing of the music onto physical format so that it's spirit shifts and moves on each listening – maybe because the music wanders so much from its inception to its close. 'Mainstream Is The New Acid' suggests track two, a light and spacious dream world that seems to float out of the speakers, melodic and hallucinogenic and the absolute encapsulation of that notion of freeing ourselves from the always-on demands of today. 'Step Into The Other World' is, for more, Far Eastern, Oriental, mysterious and ancient, civilized but of a different civilization and yet my kids, perhaps more properly now that I hear it again – that sense always of taking different things from the music on different listens – picture it as being Indian in its Eastern vibe; pictures painted musically. A lovely piece.

'Cerebral Massage' plays this one out, a more lively and innovative piece that bubbles up with freshness and vitality. Heavier than what has come before with some sharp and robust drumming propelling the musicians along in the most space-rock track in this set. A very smart collection in total that I see for European customers to the OSC website is priced at only €10 (I assume this the album that Scott notes on the OSC website as having been produced by the pressing company as CD-R instead of glass master CD and reduced in price by the band accordingly). It's a bloody bargain and restricted to 500 copies so please get in early and get your head out of the social networking matrix for an hour in the company of some great sounds.