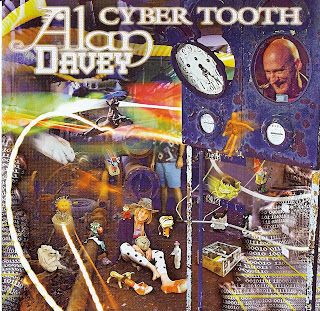 There's a lot of material that's been backed up for review here since the blog has been on an unintended hiatus over the spring and what laughingly passed for the summer months so I suspect that blog entries in the coming week will focus on new records by 'friends of the blog', since I've received new albums from Alan Davey and Sendelica, and the next in the sequence of extended and amended reissues from the Paul Roland catalogue, to name just three in addition to the excellent new Litmus album already covered.

In some ways, holding off from reviewing Cyber Tooth, Alan Davey's latest solo offering, has been a good thing. I know that Alan feels this record to be his strongest solo release to date, whereas for me it has been something of a grower as opposed to the immediate WOW factor of Eclectic Devils, its most recent predecessor. I started off somewhat nonplussed on this album, or more probably not understanding the change in direction that Alan has taken with here, but have enjoyed it more each time I've come back to it. So I'm that at point where I'm finding it a much stronger, more cohesive album than, for instance, Human on the Outside, even if I still want to mark it lower than Eclectic Devils which, in any case, contains the majestic 'Encounter', probably the best track on any Davey solo LP, and the hugely impressive 'Angel Down' with Simon House's guest appearance – so it's a damned hard act to follow.

Cyber Tooth has been on sale for quite a few months now, so I suspect that blog regulars will either have it already or at least know something of the concept of this one but for those needing to catch up on all things in Alan's world – and by gosh this is a driven musician with such a lot of range and so many projects on the juggle to demonstrate that – this, in his own words, is about a computer virus that "eats PC flesh but can't eat Apples... yet."

It's a fairly dark album in texture and in tone – and heavily into its instrumental sequences. Davey's bass lines and keyboards have rarely sounded so brooding, and on tracks such as 'Harmonic Orgone', the whole instrumentation – Davey plays everything on this record – is introspective and moody in a way that we've probably never heard from him before. In that respect, we're getting an unexpected record here, one of maturity and considered experimentation that doesn't rely on what the artist has done before but looks for new avenues and pathways to expand the range of music being played. It's as though Gunslinger has absorbed the full-on rocker within Davey's musical personae and this solo album – much like the path he took with Bridget Wishart on their Djinn collaboration but in a less pronounced way – has been the conduit for a different style and approach.

Perhaps this is what took away the immediacy from this record – they way he's working is still familiar in parts and if you were played most tracks cold then you'd finger them as being by Alan Davey pretty much from the start but it's still enough of a deviation, or more properly I guess an expansion, to have you running to catch up with the new routes that he's taking here. And perhaps that in part is because he's nailed his concept material, the whole inner-workings of computer technology thing, its impact on us and the way that we've created for ourselves a new method of our own destruction through computer viruses and spyware programming.

In Record Collector this month (September cover date) I'm reviewing Paul Hayles' Lastwind album, Return of a Sonic Assassin,and contrasting its cohesion with what I'd previously felt to be the more ramshackle scattergun of the latest Hawkwind release, Onward. The same would apply here, really. I mean, hell, the same would apply to all of Alan Davey's post-Hawkwind solo albums. There's a sense of flow and continuity to this record that knows its history and realises how to build on that by keeping core musical themes while spreading out to new bases so that it's the quintessential space-rock that we're craving but with a flexibility and an ambitiously roving creative eye. So I'm pleased I didn't review it on receipt and, while I'll stick to my guns on Cyber Tooth in comparison to Eclectic Devils, I'm pretty pleased with what I'm getting from this record's repeated plays.

Pick of the album: 'Cyber Tooth'. The title-track, though it's situated at midpoint, really sets up the concept at work here. 'Cyber Tooth has a nasty bite / cyber tooth gets in at night / cyber tooth will eat your disc / invisible spyware fist'. It's gritty and relentless.
Links:
Alan Davey Official Website

Posted by Ian Abrahams at 14:43 No comments: 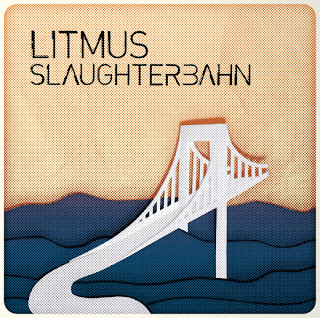 Has it really been six months since I've had the opportunity to work on updating this blog? It seems so, looking at the most recent posting and discovering that it was uploaded back in March. It's been a fragmented few months since then, with the writing highlight having been my free festivals bands feature in Record Collector's August edition, while I've also done some work on a second edition of Sonic Asssassins and am a long way into finishing an update of Strange Boat – Mike Scott & The Waterboys. The latter will be an e-book only release for the moment, whereas there may be some positive news on the Hawkwind update/rewrite before the year is out. Festivalized, however, is in a bit more of a state of flux, looking either for a new publisher or for a slot in the schedule to reformat it as an e-book and print on demand. More on that one as it develops, really.

That six months pales into insignificance really; can it really be three years since I was interviewing Martin Litmus on the occasion of the release of the third Litmus album, Aurora? It seems it was, and since then we've been left wondering what was happening to British space-rock's Kings-in-waiting. They'd already self-issued their debut LP, You Are Here, and gotten themselves the attention of the modern Hawkwind audience, had a clutch of great reviews for Planetfall, released by Rise Above Records, supported Julian Cope – this blogger saw them go down a storm with Cope's packed audience at the Fleece in Bristol – and then really compounded their potential with the excellent Aurora, also on Rise Above.

And then they sort of faded away. They had a few line-up changes, particularly behind the keyboards and synths and, I guess real life possibly also got in the way of taking things further, and it seemed for a while as though we might not be treated to fourth album. But then Slaughterbahn arrived, recorded by the core trio of Simon (vocals, guitar, synth, audio generator), Martin (Vocals, bass, mellotron, synth, audio generator) and Marek (Vocals, drums, synths). They've added James on keyboards for live dates and I see they've secured the opening slot for Hawklords at their tour gig at Hastings (The Carlisle) on 7th November. So I'm hoping this is the start of a well-deserved resurgence for this band.

As with Aurora, there is a real continuity from You Are Here inherent in Slaughterbahn that sets the three records apart from Planetfall. I described that one as having an industrial influence back when it was released, a notion that if you revisit the interview with Martin from 2009 you'll find he didn't really agree with, but it's certainly a heavier and colder affair than any of the other three Litmus records and if I'm honest I'm very happy that again they've eschewed that approach in favour of the melodies and harmonics that make their other albums approachable and highly appealing.

In an unpublished review of Aurora I talked about this album's immediate predecessor as showing that Litmus had broken free of convenient journalistic shticks with a contemporary sci-fi swish that might be possessed of elongated improvisation but was based on solid verse, chorus foundations and noted how on Planetfall, they'd produced a juggernaut heavy rock album that obscured the more thoughtful parts of their work. I felt they'd avoided repeating that on Aurora by recording the guitar/bass/drums at Foel Studios in Wales and then overdubbing with well-judged keyboards back at base, before commenting that saturating their basic sound in this way produced an immensely satisfying album of depth.

In fact I'd comment on Slaughterbahn in very much the same terms. Its twelve tracks are generally focused, sharp and to the point, with only a handful exceeding the five minute mark. They've retained their trademark vocal style which is based on an almost chanting methodology, as though they are descending down on to the Earth to preach their interstellar message but where last time out they were declaiming "We are Kings of infinite space" now they are appealing to be given "the stars / the future" or talking about how "with endless possibilities / standing senseless / the future stretches out before us." I don't know why we've not treasured what we've got in this band so much more quite frankly; I'm not hearing many other bands ploughing this furrow with so much fire, verve and accuracy. To my ears they've completely nailed that amalgamation of driving riffs, bass lines that cut right through to the heart of the sound, keyboard soundscapes and sci-fi imagery that really is the foundation for great space-rock. Slaughterbahn is a dynamic and exciting collection of songs which are going to go down so well in a live environment and, going back to that notion of resurgence, I'm hoping that this record, self-released and self-promoted though it is, is a positive restatement and restart for Litmus – it bloody well should be.

Pick of the album: 'Streamers', a genuinely brilliant, up-tempo and life-affirming three and a half minutes. "Head on through a wall of sound ... scion magenta / yellow corona / white star supernova ... see the streamers tearing through the walls."