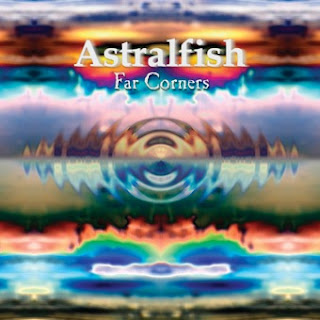 Here's another album that I mentioned during the Christmas blogs sequence; essentially an off-shoot of Spirits Burning – or more to the point of the Spirits Burning with Bridget Wishart sequence of records – Astralfish is Don Falcone and Bridget Wishart in instrumental mode producing sixteen tracks that "mixes space, ambient, jazz, rock and symphonic," with support from Daevid Allen (who appears on the track 'Far'), Richard Wileman of Karda Estra, Martin Plumley of Chumley Warner Bros, Culture Shock's Jasper Pattison, Mooch's Steve Palmer and a number of other members of the space rock, Spirits Burning, fraternity.

Don and Bridget certainly do explore all of those genres that they identify in their press release, but the record still sounds like a cohesive whole. These are short, sometimes almost thumbnail sketched tracks – none of the elongated movements that so often appear on records reviewed here – and it's fresh and approachable because of that. At the same time, the textures through the pieces have a nicely varied feel due to the revolving cast of musicians and instrumentations. So 'Summer Snake', gloriously smoky and atmospheric, derives its sense of identity from Purjah's tenor sax, while 'Riding The Seasons' is informed by Cyndee Lee Rule's violin and across all of the tracks there's Bridget's EWI (Electronic Wind Instrument) delivering a range of tones from violin to oboe, French horn to pipes, synths to guitars. 'Key Rings' has a bright ease about it that colours-up its repeated electronic rhythms, 'Cloud Gather' cuts a heavier line with some nicely distorted guitar work – it's all about that sense of range.

So, while it's not really possible to describe this simply as a diverting change from standard Don Falcone / Spirits Burning fare, since there are other diversions from the SB format that Don's been releasing recently, such as the ambient-industrial Grindlestone album Tone from late last year, and because SB fare is 'non-standard' and unpredictable in any case, Far Corners clearly represents another angle both on Don's work generally and his collaborations with Bridget more specifically. It's a little 'background' perhaps but again that's part of what makes it work – I do like to have this sort of thing easing the work along when I'm writing – and it's multi-faceted enough to intrigue the listener into following its gentle meanderings, listening out for the next texture change and picking out its nuances and moods.

Issue #32 of R2 Rock N Reel landed here over the weekend. This issue I've got an 'Insight' interview with Mr Bevis Frond himself, Nick Saloman, on his recently ended sabbatical from the music industry and the marvellous new Frond album The Leaving of London and another 'Insight' piece with the wonderful Hazel O'Connor on her recent three-way album with Claire Hirst and Sarah Fisher, I Give You My Sunshine. Both interviews ran much longer than the 600 words of an R2 Insight piece and 'unused' bits may well appear here in due course. I'm also in the review pages writing about a number of new CD releases of which the most interesting to blog readers will be the intricate and intelligent album by Andrew Keeling & Otherworld [Keeling is an author of a King Crimson study and has collaborated with Crimson violinist David Cross), Bells of Heaven, and the folk, sometimes dark folk, album of Totnes-based Mae Karthauser's Mae and the Midnight Horses album Black Horses. Next issue is their annual festivals special – watch out for that one in a couple of months time.
Posted by Ian Abrahams at 11:30 No comments: 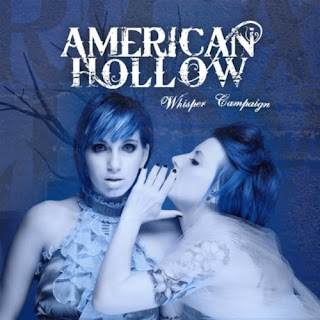 I mentioned this band from Salt Lake City during one of my Christmas posts and following on from that received a copy of the their debut album Whisper Campaign, released back in 2010, which is an intriguing and enjoyable mix of styles that doesn't particularly wander too far from their progressive metal modus operandi, even while it delves into some stuff that's more spacey or even ambient, but which still delivers ten distinctively powerful and atmospheric tracks. American Hollow are Kyle Mullikin, Chronos, Jameson, and Nathan Alan Gilbert.

They kick-off with a brooding and militaristic instrumental , 'Terronoia', which sets up a heavily oppressive mood in its drum patterns while a more optimistic chink of light breaks through before letting rip with some very strong songs that have a density and darkness to them that reminds somewhat of Porcupine Tree in places – I'm thinking particularly of 'Variable' here but it does apply across the ten tracks of this record. Partly perhaps that's the deliberateness that they seem to move their way across their songs, there's a coiled spring within their work that keeps straining to break free but is held-back, properly restrained, by the musicians, and that adds to the layers in the texture of their work very effectively.

That sense of holding back and holding down the songs, led by the considered bass lines and drums also gives their songs a pensive quality and a tension that is palpable – 'Gravity' delivers this musical tautness in spades, the song straining at its leash and creates a claustrophobic aura that demands a rapt attention.

Elsewhere it's conflagration of grinding guitars against clear and sharp vocals that imbues their tightly-sprung energy with an urgency and life, alongside the manner in which they splash different pallets of sound against the more traditional rock elements of their music – it's not that they want to imbue these tracks with lots of experimentalism but in each number there are moments of the unexpected – the where did that sound come from and the how did they get something to sound like that – which expands their aural range.

When they finally cut lose – 'Blow Wind! Bring Forth Storm' – they really pounce on the listener and the track is sharply named for the maelstrom that's produced – but there's still an eye in the storm for reflection and a reminding that whatever you think you're getting with this album, American Hollow will turn it around and give you something different. When those militaristic drum patterns return – 'Terranoyed' – they underpin a different mood and musical tone altogether – melancholic and reflective. It's that sort of record, you think you've got a handle on it and it's moved on again.

Posted by Ian Abrahams at 19:59 No comments:

Just picked up the latest issue of Record Collector wherein I'm covering some very good new CDs and a really quite excellent book. The most relevant to the blog is a new compilation of psychedelic-progressive Russian music that's been released by friends-of-the-blog Trail Records in the US and is entitled Tripwave. The review is also currently on-line on RC's website and can be found here. Over the Christmas period I enthused here about the latest Paul Roland reissue, 'Masque', and in this issue I'm reviewing it in print, along with New Church, the new studio from former Shane McGowan collaborators The Popes and Fantagraphics' exhaustive study of Black Power music, Listen Whitey!, written by Mushroom musician Pat Thomas. Great releases all.
Posted by Ian Abrahams at 08:43 No comments: