I'm rather curious. Who decides to adopt a name like Guineafowl for himself as well as for his band? I received a copy of this five track EP recently and, though again here's a recording that's outside of the original remit of this blog it's something that I enjoyed and wanted to highlight. Well, someone who comes from a highly creative background – we learn from his press release that his mother, stepfather and brothers are all successful visual artists who are able to live off the financial rewards of their work, while his sister is a film producer and his father a fashion designer with his own boutique. So while none of those connections necessarily confer a successful creative gene, it's clear that our musician here has at least been exposed to the environment where creativity is more than just its own reward but can repay hard work and inspiration in financial terms as well.

"My family, particularly my brother, showed me that art is about capturing stories," he tells us. "Although I'm not a painter, that's how I've always seen my songwriting – another way to translate a story."

He's from Sydney, described as having captured his first recordings in "a small dwelling above an antique store near Bondi Beach" with "merely his laptop, its in-built microphone and a soda water at his side," and from there Hello Anxiety started to ferment and brew into its current form, and from which Guineafowl has developed into a full band line-up, bringing the songs to audiences and challenging the main protagonist who notes that "In choosing my band there was only one rule: they had to be better players than me."

Across the EP is the development of the artist. 'Botanist' represents the lonely starting point as it contains an original vocal delivered into that laptop microphone, but, that aside, and I guess aside also from the demo 'Mothr', the other tracks, 'In Our Circles', 'Little Fingers' and 'My Lonely Arms' are full-band studio affairs. They're not all easy listening – 'My Lonely Arms' has an aggressive lyric and there is a sense of pent-up emotions coiled tightly within these songs. But they are most definitely intriguing songs with resonance and depth that capture a range of feeling and emotions, circumstances and frustrations.

Posted by Ian Abrahams at 13:04 No comments:

A lovely warm spring morning in Cornwall, book-ended at both sides by long bank holiday weekends and a chance to deliberate over some of the records that have been landing here, including these releases sent over by Keith from the excellent Fruits de Mer label. 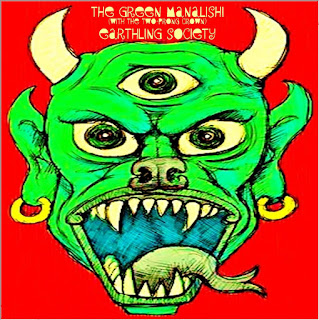 Let's talk first about Earthling Society's 7" single 'The Green Manalishi' / 'And I Heard The Fire Sing', because aside from this release we've the next ES album to look forward to in the summer (I understand from Dave at 4Zero, who will be releasing Stations Of The Ghost, that it will be appearing sometime in June) and I should have an interview with ES mainstay Fred Laird to conduct and post during the next couple of weeks. This one is 7" coloured vinyl and limited to 400 copies and should be available from 31st May as I understand it.

The A-side takes the sinister twists and turns of Peter Green / Fleetwood Mac's original and gives it Earthling Society's own haze and fuzz psych-gothic layers over which the lyrics are drawn and declaimed in a manner that is both whisperingly confidential and yet in keeping with the grotesquely imagined original, whether it be describing Peter Green's schizophrenic collapse, his monetary disputes with the other members of Fleetwood Mac (as Green himself maintained) or is a some form of LSD-fuelled reflection Green's own drug issues and struggles. ES's rendition is inspired, taking the song to a lower fidelity of delivery while managing to paint a vivid mysticism to the song, restrained and yet restrained as though there are both internal and external forces conspiring to hold this one in tight grasp.

On the other hand, the label asks whether the flip side of this record is "Jimi Hendrix-meets-Skippy the Bush Kangaroo". Personally, I like to imagine Fred as possessing a near encyclopaedic knowledge of the most obscure psychedelia and chortling in delight at recreating near-forgotten sixties garage numbers, such as this one from Adelaide-based Australian band The James Taylor Move (hear the original here). How do Earthling Society manage this neat trick of being so fabulously flamboyant in performing their stylistically lo-fi interpretations? This is quite deliciously over the top and just so way out there, man... 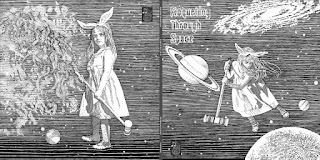 Moving on, then, but staying in the covers arena, Keith also sent over a promo of Roqueting Through Space, more coloured vinyl on LP plus a 7" single and a gatefold sleeve of space and Krautrock renditions including appearances from long-time friends of this blog, Sendelica and Vert:X. "As we discussed possible tracks for inclusion with a number of our favourite bands, the press sheet notes, "we gradually realized that 'space rock' is a great term for a type of music, but it means completely different things to different people – spacey, spaced-out, outer/inner space, sci-fi, instrumental jams, electronic rock..." Tell me about it!

"We decided to drop the pretence of defining the genre," the PR goes on to note, "and instead gave our chosen bands the scope to decide for themselves what 'space rock' meant to them – and if the end result worked for us it was in." Well, the collection as a whole worked very well for me – covering and capturing a range of concepts that encapsulates the multiple possibilities that 'space rock' evokes, from the heavy, driven, rock end of the genre through the more eloquent song-based sci-fi imagery and off into its wild and the wacky nether-regions.

OK, let's pick some highlights out of this ensemble. Let's get a listen to the 7" element of this package – Sendelica and Nik Turner reimagining Hawkwind's 'Urban Guerilla' and Alpha Omega doing an amalgamation of the Hawks' 'Transdimensional Man' and 'Paradox'. Though a huge Sendelica fan, actually I wasn't totally sold on their take on 'Urban Guerilla' (not, I'll add here, one of my favourite Hawkwind tracks in the first instance) even though they take a completely fresh look at it and avoid any semblance of the slavish cover. Alpha Omega's collision of two Hawkwind numbers that I've always really loved really hit the money for me. "We wanted a more obscure track and a well-known one and so decided to combine the two," they note. The merging of the two is totally unexpected and the female vocal really brings something additional to the interpretation.

Dairmuid MacDiarmada's engagingly humourous and deceptively complex reimaging of The Tornados' 'Telstar' is a real scene stealer with a droning foundation overlaid with some childlike glee at getting to grips with such infectious melodies; I'm hearing a little bit of 'Here Come The Warm Jets' in the rethinking but also some real enthusiasm at being able to play around with such a classic number. Helicon sprawl across ten minutes of Neu!'s 'Hallogallo' (I'm hearing some semblance of Astounding Sounds-era Hawkwind here, 'Dream of Isis', that sort of thing but that's the cross-fertilisations of influences anyway); "We were jamming along and simply couldn't stop..." they comment - and they've concocted a really trance-inducing soundscape. The other Neu! capture here is Frobisher Neck's 'Isi', another great example of an artist delighting in the opportunity to develop on a theme from something they've always loved and been inspired by and the result is really happy and inspiring take, spacey and expansive and uplifting.

Elsewhere here, Julian Cope's 'I Come From Another Planet, Baby' is covered by Vert:X, Vibravoid (who I'm not familiar with) play Hooterville Trolley (who I'm not familiar with) on 'No Silver Bird' (which I'm pleased to now be familiar with), Cranium Pie's Research Baking Station (would be a great name for a fanzine, that) cover Brainticket's 'Blacksand', Luck of Eden Hall are present with Pink Floyd's 'Lucifer Sam' and The Grand Astoria deliver Can's 'Oh Yeah'. A really great exploration of what space rock is and where it meets and merges with Krautrock.

Posted by Ian Abrahams at 11:05 No comments: