Posted by Ian Abrahams at 19:36 No comments: 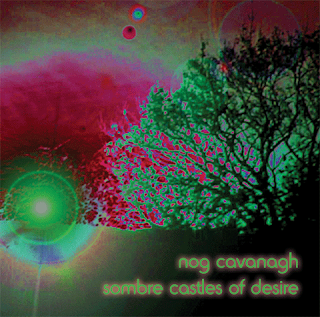 Describing himself as "an independent musician based in the north of England", Nog Cavanagh has already released one album of instrumental space rock, Everything Leads to Here, on his Angry Robot imprint and, though it has taken him a further five years to produce a follow up now offers us Sombre Castles of Desire as his second exploration of outer and inner space – and a mighty fine offering it is too.

Cavanagh effortlessly moves through most of the touchstones of contemporary space rock, composing mellow soundscapes and crystalline visions here, driving, sometimes even guttural, rockers there, delivering a wide-ranging sense of aural textures that meld together across this record. It's a genuinely multi-instrumental approach that is employed here. Nowhere do we hear a focus of one instrument over another, everywhere is Cavanagh's multi-layered techniques building up strata upon strata of sound with guitar, drum machine, synth and electronics that create a sound that is sci-fi in the best sense of space rock with an intriguingly slick and professional aura to it – these are well developed compositions with a lot happening within them and which really hold the attention throughout.

'Astraglyde' has a thoughtful aura about it, gradually building up the atmosphere, never getting heavy but methodically becoming more layered as the track expands and develops until it draws back inside of itself again. Following it, 'King Arachno' opens its account with some grinding guitar overlaid with a repetitive sequence of signature notes that soundly strangely familiar even while I'm struggling to place them, developing into an intoxicatingly space rocking number. 'A Chemical Taste On The Tongue' is all weird electronics and pulses with some doom-laden synths happening in the background; the title track starts as though it's going to continue the theme before quickly becoming a more gossamer electronic rumination. Four tracks in and we can hear the range with which Cavanagh is building his work, and that's generally the approach here – around each corner, into each individual track, there's something new and interesting while all the time poking at the different vibes and angles of space rock. Writing as a non-musician, this is a record that's full of the "what's that going on here" or of the "how's he achieving that?" It's an inventive, creative, exciting and engaging record.

Posted by Ian Abrahams at 19:29 No comments:

Here's something I've not done before on this blog, but with the kind permission of my friends at Esoteric Recordings I've copies of their recent and excellent Skin Alley releases – The CBS Recordings Anthology and Two Quid Deal? to give away as a promotional competition on this blog.

I've one set comprising the two CDs to give away, anywhere in the world, to the first randomly selected e-mailer who correctly answers the following question:

Which founder member of Skin Alley later spent time as bassist for Hawkwind?

E-mail your answer to mailto:spacerockreviews@gmail.com

I'll keep this competition open until midnight on Saturday 19th March 2011 and e-mail the winner for their postal address as soon after the closing date as possible. Please feel free to post this link around the newsgroups, Facebook, etc. Please note that these CDs have been made available with the kind permission of Esoteric Recordings but that that does not imply any endorsement of this blog by Esoteric Recordings or Cherry Red Records.

Supporters of the blog can buy Esoteric's Skin Alley, High Tide and Hawkwind titles on these affiliated links. 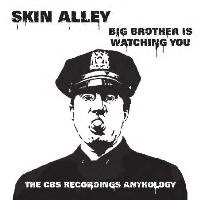 Big Brother Is Watching You: The CBS Recordings Anthology
eclec22243

Esoteric Recordings are pleased to release a two CD anthology by legendary Ladbroke Grove underground act Skin Alley. Formed in 1969, Skin Alley were part of the infamous Clearwater stable that included fellow acts such as Hawkwind, High Tide and Trees. Skin Alley's infectious fusion of jazz and rock was suited to the time and the band became a regular attraction on the underground festival and concert circuit. Signing to CBS Records in the autumn of 1969, the band recorded their debut album with producer Dick Taylor (former guitarist with the Pretty Things).

Famous for its Policeman cover, the album featured excellent tracks such as Living In Sin, Tell Me, Country Aire and Night Time. Prior to the release of their second album Skin Alley recorded a soundtrack album for the film Stop Veruschka! about the infamous German model. A wonderful set of music and songs, the album was shelved in favour of a new set of recordings that was released as the album to Pagham & Beyond. This anthology includes all tracks from that second album, plus the entire unreleased Stop Veruschka! soundtrack. Re-mastered from the original master tapes, Big Brother is watching you is a fine tribute to one of Britain's greatest underground acts of the early 1970s.

Big Brother Is Watching You / Take Me To Your Leader's Daughter/ Walking In The Park / The Queen Of Bad Intentions / Sweaty Betty / Easy To Lie / Taken From The Album To Pagham And Beyond ; Russian Boogaloo / Skin Valley Serenade / Sun Music / Bird Music / Snow Music Taken From The Unreleased Soundtrack Album Stop Veruschka 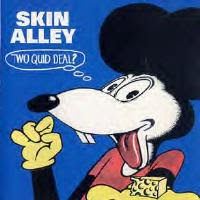 Formed in 1969, Skin Alley were part of the infamous Clearwater stable that included fellow acts such as Hawkwind, High Tide and Trees. Skin Alley's infectious fusion of jazz and rock was suited to the time and the band became a regular attraction on the underground festival and concert circuit.

Signing to CBS Records in the autumn of 1969, the band recorded two albums for the label and underwent a change to their line- up before departing CBS and appearing at the 1971 Glastonbury Fayre. Soon after the band signed to Transatlantic Records and recorded their third album at Rockfield studios with producer Fritz Fryer. Arguably their finest effort, Two Quid Deal includes the classic sun music (recorded in a different version for the album Glastonbury Fayre), Nick's Seven, Skin Valley Serenarge and Graveyard Shuffle. This reissue is re-mastered from the original tapes, restores all of the original album artwork & includes two bonus tracks.

Posted by Ian Abrahams at 16:56 No comments: