Here's one of those irregular, ought to be more regular, round ups of things of interest, mentions of new releases from artists that I've previously covered in more depth (doesn't preclude a longer commentary later of course), tasters of items that will definitely be covered in further detail soon and notes of stuff that I've received and will be reviewing in print elsewhere...

I received a couple of packages in the mail this last week from my old mate, and long-time Hawkwind fan / lyricist, Roger Neville-Neil – one contained another couple of no

vels featuring the classic pulp character The Avenger (see previous post mentioning these very welcome packages) and the other is relevant to this blog since it contained a copy of Two Sides by Mars Retrieval Unit, who I'd commented on a couple of posts back as having enjoyed some of their music which bassist Joel Davis had kindly directed me to. Roger also included some of his excellent gig photography, various images of the band at a recent gig – funnily enough he's particularly photographed their saxophonist, Chelsea Luker, which I think must stem from an interest in saxophonists in general since he's often photographed Nik Turner as well... I'm sure that's why! (I'd insert a smile here if this were an e-mail exchange). Seriously, Roger has sent a number of photograph collections across recently – including some great pictures of another of his, and mine, favourite bands, The Upsidedown, which he's previously given me permission to feature here, so I'll do an Upsidedown post in the next few days and then try and organise a posting on MRU with a proper CD review and Roger's photographs. 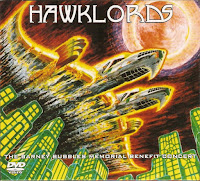 Also received this week was the just released Hawklords Barney Bubbles Memorial Benefit Concert DVD, recorded live at the 229 Club in London a while back – I did a little bit of work on the press for the show and so won't be reviewing this one in print since that always seems a 'conflict of interests' but it doesn't preclude me from covering it on the blog so again look for a write-up on this over the next week or so. What I can tell you now is that it's getting excellent reports on some of the Hawkwind-related Internet groups and can be purchased via PayPal at their Hawklords@hotmail.co.uk address for the price of GBP £19.99 + Postage (£1.00 in the UK, £1.50 for Europe and £2.00 for the rest of the world). I was certainly delighted to discover they've included me in the 'credits' for the show under 'Publicity and Promotion'. Should mention there is a YouTube channel for the Hawklords which can be found here. 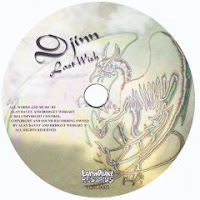 Davey and Bridget Wishart under their Eastern-monikered 'Djinn' identity. This is one that I will, all being well, be covering in print fairly soon but I'll also be featuring here, possibly with some commentary from them both when I can get that organised. But for those who've been eagerly anticipating this album, based on Alan and Bridget's shared loved of Arabic scales and the ambience of middle-eastern music, the album was released on 25th February and can be purchased direct from Alan's official website. This one is £10 plus P&P.

Should say, if anyone is ordering from any band or artist via link here, do please let them know who sent you!

The Universe Is Mental, claims the new album from the excellently monikered 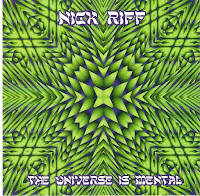 Nick Riff. It certainly seems so at the moment – perhaps even more so than unusual. I've been a bit of a fan of Nick's music since receiving a copy of Photon Shift from him a while back and this latest in his sequence of 'Riffdiscs' doesn't disappoint. "Musicians are always asked to describe what their music sounds like," he notes in the sleeve notes. "The Riffdisc Series is an attempt to answer that question by focusing each release on a different element of my music, and in the process somehow maintain a continuity and essential Riffness." Again, I'll write this up in a little more depth when I've the opportunity but this one is nine tracks of instrumental-focused space rock – very good stuff.

The very honestly monikered Pete Unsigned e-mails to tell me that his band supported Alan Davey at a show in Glasgow a couple of years back and to direct me to his Myspace page where there are three classic rock tracks on his music player. 'Tsunami' builds up and rolls in with a real force behind it, with heavy riffs, sharp and precise drumming and some gruffly barked vocals – I'd have thought this would go down very well with the Alan Davey Bedouin/Gunslinger audience. 'Follow Me' sounds lo-fi in one sense, it's a bit muted and demo-like, but it certainly does have a bit of a punch to it as well with some militaristic drumming and an incessantly marching guitar riff. 'Hangmans Call' is a live recording, a real thrash of clashing guitars, drums and screaming vocal delivery, sounds a damn good moshing number for Heavy Metal enthusiasts. 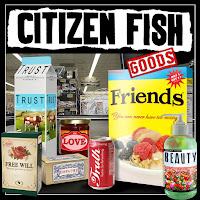 Dick Lucas, ex of Subhumans, who is a contributor to the still forthcoming, but soon to be published honestly, Festivalized, e-mails to announce the release of the new Citizen Fish album, Goods, on the Alternative Tentacles label. “13 songs of ska-punk with twists... and it is the best one yet.” And it comes on a choice of formats... CD and LP... for £8 including P&P (or €12.00 in Europe, or $16.00 to the USA). “It’s just good, catchy shit” says Punk World Views.

I'm looking forward to my mate Dave Weller at 4Zero Records releasing the latest Earthling Society album in the Spring, and organising an interview with band-leader Fred Laird in due course as this is a band that regular blog readers will know that I'm a huge admirer of. Fred recently e-mailed around to relate how "Earthling Society recently took the rock road down to London to have Stations of the Ghost sonically enhanced. The brilliant Nick Robbins of Sound mastering / Ace records, who engineered on classic albums by The Pogues and mastered the recent re-releases by The Move and all manner of reissues through Ace/Big Beat has done a wonderful job at bringing the new album to life. Stations... features seven tracks of epic psychedelic rock mixing Dark Prog, autumnal bucolic folk, Doctors of Madness ballad-esque glam and Stoner/drone rock, taking in themes of weird cosmic horror inspired by our literary hero Arthur Machen and the tales that surround the witch country that is our home county of Lankyshire." They've also been busy reworking Fleetwood Mac's 'Green Manalishi' and "an obscure down under hard pysch number from the James Taylor movie" which will appear as a coloured 7" vinyl only release on Fruits De Mer.

Posted by Ian Abrahams at 17:16 No comments: 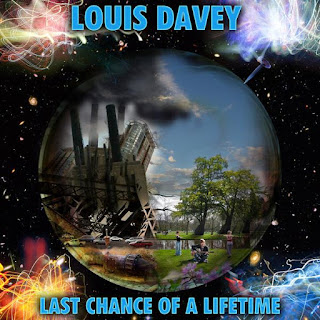 To set the scene of this solo record from Gunslinger guitarist Louis Davey, he's the nephew of Alan Davey and has drawn on some of the same group of people who've been working on various projects with Alan since he left Hawkwind: the Pre-Med vocalist Danny Faulkner, Paul Cobbold who has ,as I understand it, recently been working with Alan on the mastering of a much anticipated Gunslinger live album, and Kevin Sommers who has produced some excellent artwork for Alan's own releases over the last few years. And, of course, Alan himself who plays bass and synths on all tracks here, with the exception of Cobbold popping up with Bowed bass on the title track, and adds his production skills to proceedings (and no doubt adds a valuable layer of experience to proceedings in general).

OK, look, that gives us the context of some of the contributors to this record but let's move straight on from that and give Louis the full credit he deserves in his own right for this vivid and muscular and very rocking collection of songs.

This is a record that has a real pace to it, lead guitars full of fire and vim supported but not overwhelmed by that rolling, driving bass that we're so familiar with give the music a dynamic and purposeful energy that's pretty exciting through-out the ten songs. If we want to give some sense of where this album lives then it's moving in the same area as some of the heavier elements of the two Pre-Med records, but it also has a really good juxtaposition of vocalists present because aside from Faulkner (whose delivery I'm such a big fan of and who pops up on two songs here) there's some very good work from Georgina Davey, Lindsey Wyborn, and Emma Mackenzie. If it's wrong to specifically pick one of these three ladies out then apologies to the other two, who both add sterling contributions, but Mackenzie's cool and sweet vocals on 'In Her Light', 'Higher Tax' and 'No Sense' are a fabulous contrast to the richness and depth of the music and work extremely well.

The title track, which actually plays the album out, is a moody and spacey instrumental with a dreamlike quality to it with what my musically untrained ears take to be Cobbold's bowed bass playing (booklet pictures suggest it's exactly that – a bass guitar being bowed) adding a extra melancholic dimension to the sound. To pick some others, 'Don't Hide Behind' has a psychedelic jam band quality to it that does have something of a Hawkwind feel, 'Free' starts with synths and strumming that leads into a vaguely middle-eastern moment before picking up some quirky electronics that give way to Louis's guitar work and Faulkner's vocals on a classic 'time has come / years have passed' lyric. 'In Her Light' is catchy and accessible while 'The Other Face' is intriguingly sci-fi in tone and atmosphere.

So, two ways of looking how to file this on the CD rack here. It sits very well next to the run of CDs by the more senior Mr. Davey and deservedly so because this is a high quality record. On the other hand it absolutely stands on its own merits as well.

Posted by Ian Abrahams at 16:27 No comments: