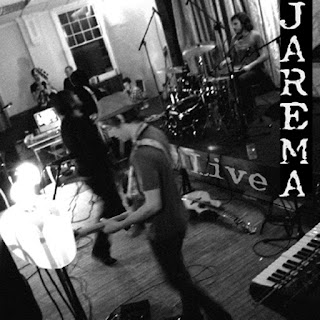 This week's first review might have been on a tribute release to a band whose influence is almost a raison d'etre for a lot of the music reviewed here but we'll go off on a total tangent now with this 'live at the rehearsals space' digital download album from Belgian musician Andre Jarema, since Live is one of those recordings that I occasionally drop into the blog that have little if, as with this set, any direct relationship to the original focus of this site but which I've come across or been directed to and want to share some thoughts on. I'll note again, if I was starting this blog now... it'd certainly have a different name and angle.

This isn't Andre's first album – since moving to London some seven years back he's been honing his skills to the point where he was ready to pull together a band formed of session musicians who could him help realise his ambitions, has put together his own label to self-release 2009's There Was A Night Before There Was A Day and has been gigging around this year, selling the debut CD on what he describes as a "pay what you want basis".

Is this release a bit of consolidation and a survey of where Jarema, as a band, and Andre as its driving force have reach so far? Quite possibly, since I understand that of the ten tracks included here, only three are new songs with the remainder already having been aired in their original form as part of There Was A Night..., but then that seems a perfectly sensible way of reaching out to a wider audience and, not so much pausing to draw breath but evaluating and refining what has been established and achieved.

These are quite blunt and raw sounding songs – that's a lot of the point of this recording. "Live and raw music," notes Andre. "No editing, no dubbing. Just the band, live." That approach has a real effect to it, think something a bit like James, or Oasis particularly in acoustic mode, but played by The Levellers in an indie rock sometimes glancing over at pub rock manner. Think that, because sometimes you can hear that in the music – listen to 'Birth Sex Death' and particularly the powerful 'Half A Prisoner' for example (though that's almost pure Levellers, loose the James and Oasis analogy there). But there's also a mainland continental drift to some of what they're doing and they're playing with a nice sense of room, of space between the instruments, in their music – it might be raw but it has a breeze in it as well; 'Sleazy Song', which has a well developed and easy sense of groove to it, demonstrates that.

So, here's a collection of really engaging and entertaining songs that have a passion in their playing and a nicely off-kilter lyrical content that complements their defiantly lo-fi realisations. Jarema have some gigs coming up in November / December in Camden Town and a DVD launch that captures the visuals of the band cutting this album details of which are on their website - if I were up in town then I'd certainly go as I really enjoyed this album.

Posted by Ian Abrahams at 19:53 No comments:

A Tribute Album – In Search Of Hawkwind 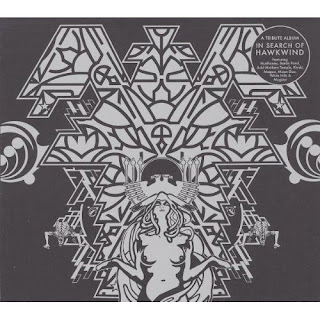 There's been a few tribute albums focused on Hawkwind over the years. Some have pushed at the boundaries of the band's work, taking established tracks on new trips and some have remained more faithful to the original tracks. This nine track compilation is generally of the latter persuasion – at least as it starts out. Having said that, there doesn't appear to be any specific plan involved – these are tracks that were recorded over a number of years (principally 2005 – 2008) so they aren't part of a particular agenda in terms of how to interpret, or reinterpret, the music of Hawkwind. Instead it's probably more correct to suggest that here is a selection of bands demonstrating the influence that Hawkwind have had on them over the years.

Let's take them band by band. Kinski are a four-piece avant-rock band from Seattle who originally released their contribution, a very early '70s rendition of 'Master of the Universe' as a joint 7" with Bardo Pond's cover of 'Lord of Light' (also included here). It's very much a Nik Turner style of delivery with a heavy and steady fuzz-ridden soundtrack, really gritty and lo-fi and authentically early Hawkwind. It's one of the tracks here that doesn't want to be anything other than an honest and dependable cover and is all the stronger for it. Also working their tracks very much in that way are project instigators Mugstar, who have a new album, Lime, released on 6th November that I'll be covering here shortly. Mugstar's 'Born to Go' burns straight out of Space Ritual Hawkwind, all racing guitars and furious drums taking no prisoners and always, always, driving onwards – absolutely capturing the essence of this key Hawk song. Their version of 'Paradox' that ends the compilation is, to my listening, a bit less successful. I've always seen 'Paradox', and much of the rest of Hall of the Mountain Grill, as being a turning point where the full-on heavy rock of Space Ritual and of DoReMi became, perhaps because of the improving musicianship and partly because of the additional of their more accomplished playing of Simon House, just that bit more rounded and sophisticated. What Mugstar have done, and it could be that it's been done for the entirely logical reason of being in keeping with the tone of much of the rest of the compilation, is play this one as though it had been cut by Hawkwind maybe eighteen months or so earlier than they actually brought it in. So I'm missing hearing the more plaintive violins and keyboards of Hawkwind's version here, where Mugstar are simply playing it full-on and dense. It's fine, in and of itself, but it sounds like a retrogressive version rather than an elaboration. But then, 'Paradox' is one of my favourite mid-70s Hawk tracks and I was always going to be hard to please on that score. Interestingly, both Mugstar tracks were recorded at Dave Anderson's Foel Studios.

Magoo (if someone can e-mail me a direct link I'll up date it here) provide a very clever version of 'Space Is Deep' that retains both the elegant thoughtfulness of the song's first half and the unashamed freak-out of its second while still adding a real freshness to it, one of the very best covers here. The messy cacophony of Bardo Pond's 'Lord of Light' I'm less convinced by since they've taken the song's pace down a couple of notches which, though it gives the vocals a chance to deliver Dave Brock's lyrics in a more deliberate manner than on the original, really eschews the power and energy of Hawkwind's versions in favour of a reworking that plods a bit and doesn't really capture the zest and sheer get-up-and-go that it should really own.

Captured for a John Peel session in 2002, are Mudhoney giving 'Urban Guerilla' the real street-fighting attack that this song deserves and, honestly, didn't get on Hawkwind's 'Silver Machine' follow-up single. I remember when I was writing Sonic Assassins interviewing Nik Turner and hearing Nik being less than effusive about their original, suggesting that though the reason for its low chart positioning, in comparison to 'Silver Machine', was clearly the withdrawing of the record early into its release, he felt it might not have done as well as 'Silver Machine' in any case – and then later getting the general feeling that Dave Brock tacitly agreed with this view. Mudhoney, however, really do this song justice and then some – colliding '60s sensibilities, '70s politics and '90s grunge to totally capture the essence of the words and music.

Acid Mothers Temple & The Cosmic Inferno provide a typically, and totally, off-the-wall blast through Brainstorm, very Turner-esque in its freaked-out and freaky anarchy so that you can say it's of the original and completely outside of the original at the same time. Absolutely manic, absolutely mad. On the other hand, almost totally removed from the original is Moon Duo's version of 'Hurry on Sundown' which is sparse enough to be described as minimalist in its synths and drum machine experimentalism – in fact it's the one track that conjures up an imagine of being completely outside of the early-mid '70s Hawkwind that the other bands here invoke; instead this could be a Brock/Bainbridge side-project in texture and atmosphere. It's good – it's just different that everything that surrounds it here.

Which just leaves us with White Hills who conjure up such a fuzz-laden, feedback driven, cover of 'Be Yourself' that it could almost be a live Hawkwind cut culled, in texture and sound quality, from one of those low-grade Flicknife Friends & Relations compilations. That's not a complaint though; it's simply trying to invoke the way that White Hills have absolute nailed Hawkwind at their most expressive and wild free-form improvisation – so much so that I can see a lot of listeners considering this the best, most authentic, thing on this really very good album.

Posted by Ian Abrahams at 19:14 No comments: