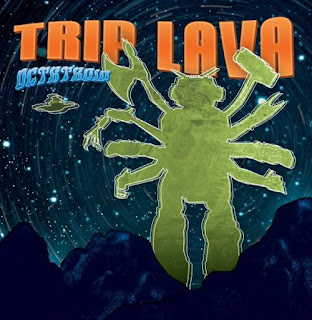 The evil King Meldagar once ruled the village. He was viewed as a tyrant by his people, and was soon ousted. The exiled king was determined to get his revenge on the villagers. He found a new home underneath a mountain, where he set up a shop to build his army of destructive robots. His first evil robot (Gurgblah) is sent out to the village to wreak havoc on the people who overthrew him.

That's the premise of this solo recording by Joel Lee who, on his Myspace page tells that his music sounds like "Acoustic drums, electric guitar, bass and loops/drones improvising in a circular pattern... sometimes it has a mind of its own, and I go with the moment. The finished tracks are then spliced together with sound effect segues and other strange things." I think he's aptly described what Trip Lava is all about... I'm more curious as to who his target audience is, if indeed he has one, because what he's come up with is an incredibly eclectic mix of sounds to be sure but one that's sure to leave a fair number of his listeners wondering, "What the heck is this?"

Now, that's not necessarily a bad thing – what Joel's put together is 13 tracks that aurally describe the events of a fantasy story that he's documented in the accompanying liner notes so there's clearly a lot of thought and planning that has gone into creating something completely packed with unearthly sound effects, off-kilter jazz sounds, insistent drumming and a vivid mayhem that at times is actually a real riot to listen to - it's even got a manic sense of beat that's quite infectious at times, such as on 'March To Battle' where the heroic robot warrior Octatroid marches off to deal with the villainous Gurgblah.

Honestly, though, I'm not sure what to make of it – it's an incredibly busy, even frenetic, work. I imagine Joel having an absolute blast pulling all of this together – and it's certainly the most unusual album that I've ever been sent to review. If you like the idea of Can performing at the BBC Radiophonic Workshop then I think you'd have a great deal of fun with the total madness captured in its cacophony of rhythms and sounds; but I suspect you'd have to be a devotee of off-the-wall discordant anarchy to really appreciate this one. If you are, then its $5.00 for a CD or a download at CD Baby.

Posted by Ian Abrahams at 19:35 No comments: 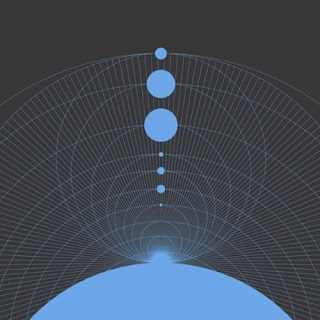 I wrote up the previous release from Peruvian space rockers Serpentina Satelite, Nothing To Say, a couple of years back in the pages of R2/Rock N Reel magazine and very much liked hearing "high-octane riffs, a splattering of the obligatory Radiophonic Workshop electronics and some portentous intoned mantras" in a "frenetically busy work that never lets up on the acceleration pedal... instantaneous, rough around the edges space rock that could never sound the same way twice." They released that CD on Germany's Trip In Time label, a follow up to an independently released EP, Long Play; now they've moved on to Rocket Recordings for what I'd described as a massive leap forward in Mecanica Celeste.
They're still the masters of the extended, improvisational, movements for, with the exception of the two-minute 'Imaginez Quel Bonheur Ce Sera De Voir Nos Chers, Disparus Ressuscites' which itself probably takes longer to figure out how to say than it runs for on the album, everything here is five, eight, ten, eleven minute tracks that take their starting points and their inspirations from traditional religious music and expand that through their own traditional mind-dissolving riffs. Certainly the opening track, 'Fobos', has a lot of the more free-form element of Hawkwind to it, and the title track itself could well be Hawkwind circa Electric Tepee if you compare it to something like Alan Davey's 'LSD' number, but the use of religious themes (such as the intoning on what we'll now for simplicity's sake simply call 'the two minute track') breaks the heavier rhythms in a quite fascinating manner and really adds both something ancient and something mythic and mystical to this record.
'Ai Apaec' to my ears seems to echo the image that I have of the band working away in Lima's cloudy heights hammering out their particular brand of psychedelic grooves, all fuzz and swirls with some fabulous Dave Brock-style guitar sounds. 'Sendero' has an oppressive militaristic drumming with the guitars marching in unison with the beat, really powerful and driving stuff that purposefully builds into a massive crescendo of pounding sounds and yet it breaks down into High Church 'hallelujahs' that really echo through old stone walls and vast Cathedral spaces adding a beautiful resonance to what has been delivered before.
Amazon, I notice, are listing a vinyl version of this album and have it for download – I don't see them listing a CD – so I'll link here to these releases but this is another great album for those looking for a fix of Hawkwind-style improvisational space rock. Apparently the October edition of Rock Sound has an interview with the band and a track on their covermount – one to watch out for.
Serpentina Satelite Myspace Page
Rocket Recordings Website

Posted by Ian Abrahams at 19:40 No comments: