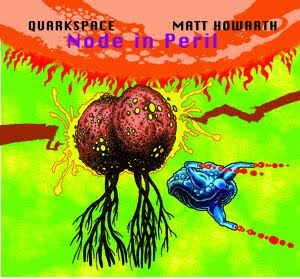 There's plenty of new space rock that's been landing here over the last few weeks and which I'll be writing up over the next few days, including the new album from Serpentina Satelite, some modern progressive rock from Jack Jeffery and some sci-fi concept material from Trip Lava as well as other Myspace pages, MP3s and digital downloads that I've been e-mailed over the last two or three months. But I'm also going to be taking a regular step back in time and trawling through the archives of US band Quarkspace who've been very patiently waiting for some write-ups since their Paul Williams kindly sent me a whole bunch of their albums an embarrassing number of months back. So with apologies to Paul and his collaborators for the delay, let's kick off this series of 'Quarkspace Archive' reviews with Node In Peril, a concept album and accompanying comic book from 2004 released on their Eternity's Jest Records.

Quarkspace have been around since the mid-1980s and they're a band I first came across through a free-to-download album, Drop, which I'll write about later in this sequence of reviews, but they're well-known to space rock enthusiasts for both their prolific output and their appearances at the Strange Daze festivals. As for influences, they'll cite "the American and English psychedelic scenes of the late 60s – The Grateful Dead, Buffalo Springfield and Jefferson Airplane combined with the more keyboard-orientated Soft Machine and Pink Floyd... [and] sometimes channelling more modern influences [such as] Stereolab or The Orb."

What we have with Node In Peril is a collaboration with comic book writer /artist Matt Howarth, someone with a long history of exploring the three-way relationship between rock music, science fiction and sequential art. He was the creator of Savage Henry, a comic series about a guitarist from an alternate reality, worked with Daevid Allen on a comic strip for a Planet Gong newspaper that was distributed on Gong's first US tour, produced comic strip format music reviews for Heavy Metal and in the comics industry mainstream worked on Teenage Mutant Ninja Turtles and Justice League Of America.

One of the things that strikes me on reading the little comic book that is packaged with the digipac gatefold CD – apparently it was Howarth who approached the band about this project, inviting the idea of having Quarkspace compose music to complement his artwork – is how the story matches with the idea of 'SciFi Strange' that the SF author Jason Sandford has been talking about and compiling an on-line anthology dedicated to this week (find out more about this and great some great short story downloads here). It's certainly a heady mixture of weirdness and Hard SF with its evocation of organic technology and 'underspace' parasites that mixes far future imagery with time travel and ecological politics – what I'm not so clear is to what extent the accompanying music is indeed to reflect the storyline and visuals of this sixteen page comic.

Certainly the opening track, 'Underspace', succinctly scores the surreal aura of the strip's opening frames – a vivid and trippy composition that floats in weightlessness and sets up the tone of this instrumental work as being otherworldly and ethereal in nature. And that's what's done so well across the 8 tracks here – it's the sort of space music that pulls you to listen to it via headphones, lying down in a darkened room – from which the senses can be absorbed into the suite of sounds with their dominance of synths and keyboards.

Paul notes how the majority of the album was developed from work that had been put into building Spacefolds 7 and 8, a part of their regular Spacefolds releases, but a couple were specifically written in response to art that Matt Howarth had sent over: 'Signal To Noise Ratio Error' and 'The Misinformed Eco-Terrorist'. The latter is the shortest piece here and actually one of the most engaging with some lovely and sprightly synth lines over some more strident bass and drum patterns, and the former a more improvisational piece based around a programmed rhythm and is quite Hawkwind-ish in its own way.

When you get a package that is actually two disparate types of media being brought together it's almost beholding to ask how the individual creative works inform each other and gel together. In this case I'd assume from Paul's sleevenotes that the comic book and the music combine most effectively together is at least in part a case of serendipity since it's not hard to visualise the music being composed with the vibe and feeling of the story (if not specifically its narrative) in mind and the two most definitely come together. In essence I'd guess this is down to Howarth choosing well the band with which to create this package, on the basis of much of the music being created independently as Quarkspace 'work in progress' rather than written for the graphics. If that's the case then the collaboration was well thought-out indeed since this is certainly a case of two pieces of creativity sparking off each other in a very satisfying way.

Posted by Ian Abrahams at 17:37 No comments: 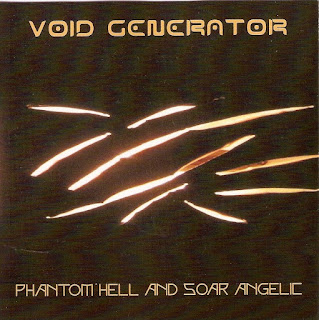 This is the absolutely HUGE sound of Italian space/stoner rock pounding out of the opening salvo, 'Message From The Galactic Federation', a 15 minute slab of intense and driving, yet at the same time melodic, no-nonsense freak-out that's the gateway to this exciting collision of Hawkwind and Porcupine Tree influences.

Void Generator were formed in Rome back in 1996, musicians who'd played together in various local situations who wanted to explore and build on what had been done previously in taking bits of psychedelia, bits of progressive and doing something innovative and experimental with it. And that's really what they did for quite a while, eventually pulling together a self-released eponymous four track CD in 2004 and getting some attention from on-line reviewers with my old mate Scott Heller writing about them for Aural Innovations that October and describing their work as "impressive stuff" while hearing the track 'Sidereal Connection' as being a "very heavy Monster Magnet – Kyuss piece of psych rock with a wall of sound approach but also some cool windy and drony synths thrown in." That release got them some exposure on compilations and a quick follow-up in a ten-track second album, We Have Found The Space.

It's taken a little time since for them to come up with their next offering, and a few changes in their roster as well, but the sounds that Scott Heller was enthusing about back in 2004 are still standing them in good stead here because though the first track is without doubt a pulse-racing noise fest that really gets the blood circulating, I'd like to try and compare it to Hawkwind because that feels right though I'd be lost to try and direct that comment to a specific era (it isn't Charisma Hawkwind in any way, shape or form, if it was Space Ritual then it's definitely an updated and reimagined one... the best I could do is say that it's 21st Century 'We Do It'... or something like that), then I'd have to go and compare its following 13 minute opus, 'The Morning' to the current tone of Porcupine Tree. I loved it's pensive mood swing, the way it immediately channelled something very different from the tone of what they'd already established on this record, that it seemed to add something sophisticated and intelligent to something else that was barbarian and primal.

That same sense of subdued, perhaps restrained or coiled atmosphere exists on 'The Eternaut', like the moments before the storm, waiting for it to arrive and knowing that when its hits its going to do so with an irresistible force, which it inevitably does, led by Gianmarco Iantaffi's grinding guitar and heavy metal vocal deliveries and possessing a real energy and power to it that subsides in the eye's storm, with some atmospheric synth chimes running free-spirited around Sonia Caporossi's ruminating bass lines, but is always ready to remerge. Remerge it does, both in this track and what puts all other hidden and unlisted tracks to shame, a 23-minute fourth appearance of the band on what purports to be a three track CD. No idea what this final session is called but it ranges from experimentalism to Pink Floyd soundscapes and again powers into oblivion until it plays out with a sparse coda of distortion.

Really good stuff, released by Phonosphera Records, this will make a lot of fans here I think.