Could I Be A Bigger Twit?

Don't answer that. No, really, don't. But do please follow me on Twitter as I plan to post regular snippets of commentary on incoming music, whwether spacerock or more general stuff - look for @IanAbrahams or find me here.
Posted by Ian Abrahams at 20:18 No comments:

More effort this week to get back on track with reviews of good stuff that has piled up whilst I've been distracted with general 9-5 stuff (let's not even start on the thirteen-hour days recently, eh!); to kick the week off, a bit of a summary of some things that have landed and which I'm either reviewing elsewhere, hoping to review elsewhere in addition to mentioning here, or which are slightly off-topic.
Let's kick-off with a much anticipated release that got mentioned here recently, the new studio album from Sendelica. Pete and Glenda have been very kind and sent over a copy of the limited-edition version of Streamdelica, She Sighed As She Hit Rewind On The Dream Mangler Remote, and once again I'm in awe of the ability these guys have to come up with such eclectic titles for their records - as evidenced by the 'no inspiration at all' title of this latest blog posting. This is another RAIG release and is available in two versions - the standard is available for £10.00 including post & pack from the Sendelica Myspace, whereas the version that I've received here is a CD/DV 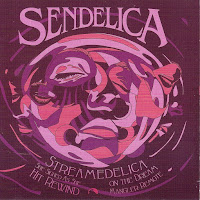 D two-disc set is £15.00 and contains, "The movie Trillian Eight plus bonus promos and live videos." I didn't get a chance to look at the DVD over the bank holidays weekend, so something to keep me going during the week to look forward to, but regards to the album 'proper' if you downloaded and enjoyed the free sampler that I linked to during the recent interview with Pete Bingham here then you'll definitely want to send-off for the whole thing. If pushed to pick a real highpoint on this one, then I'd go for Lee Relfe's sax-playing on 'Screaming And Streaming Into The Starlit Nite', which is beautifully haunting and evocative and which you can totally immerse yourself in to the complete exclusion of what's happening around you. 'Power Of The Sea' pulls the same atmospheric trick, another lovely piece, but there's also plenty of noise-fest going on bringing in the space rock and playing on their krautrock interests. I'm a huge admirer of this band.
A couple of really good things incoming from Mark and Vicky at Esoteric / Atomhenge records (via Cherry Red) that I am definitely reviewing elsewhere, and can say that with confidence, since the first of these two I review in the latest issue of Record Collector and the other I've recently submitted copy on for the same place, is their stupendous and frankly sumptuous reissue of The Crazy World of Arthur Brown and the new album from one of life's real gentlemen, Harvey Bainbridge: Dreams, Omens & Strange Encounters. The former really needs no introduction, since it is quintessentially the sound of the psychedelic sixties, but Esoteric have done such a fabulous job on presenting this reissue, with extensive liners that include a fresh interview with Arthur himself, and a second disc with a selection of b-sides, outtakes and radio sessions and alternative versions, that it's actually less of a reissue and more of a respectful and celebratory enhancement. Harvey's new album, which I assume from the title is a collection that he's been talking about for a few years, since I noticed a work-in-progress of that name getting mentioned in an Aural Innovations interview a few years back, finds Mr. Bainbridge in instrumental, rather than stream-of-consciousness, mode - very evocative and picture-forming even though at times I wished he'd added some of his outrageously wild 'spouting'. I hope this album does well for both Harvey and for the label, since it would be lovely to see some of his earlier solo and collaborative releases getting the reissue treatment and I guess the success of this new record might well lead onto that happening.
A quick 'shout out' to London-based sci-fi rock 'n'roll punksters (I hope this is a fair approximation of their raucous mash-up of sounds) The Stabilisers, who have a Myspace page here and feature my old school mate - Redruth Grammar School 197something or other, Francis Braithwaite, on drums and backing vocals. They play in and around London and though I've never managed to be in town when they've had a gig, they sound bloody good fun.

Another quick 'shout out' for Psi Corps, led by my old friend Alisa Coral, who've made a preliminary announcement of a new album due this summer, All Roads Lead To Amber, based on the 'Amber Chronicles' by Roger Zelazny. This is another RAIG release, and RAIG also are handling an EP that Psi Corps plan to have available, again during the summer, 'Shadow Creatures', which is a four-tracker that also is inspired by the writings of Zelazny. Not connected at all to these releases, but his Roadmarks novel - I guess one of the lesser known of his canon, has always been one of my favourite time-travel books and I always wondered whether it at least in part inspired Hawkwind's 'Motorway City' track - or at least the visuals they were using to back it live in the early 80s. Anyway, Psi Corps to look out for during June/July and I'll update when I hear official release dates.

That kick starts this week's blogging - later in the week I'll be posting on Astralasia, Sun Dial (who I see got a terrific feature in the new issue of Shindig! magazine), some Voiceprint releases and other good stuff.

Posted by Ian Abrahams at 18:58 No comments: