A Couple of Linkages

Fred Laird of Earthling Society updates us with news of the band's latest endeavours: "Earthling Society have just finished recording the track for the Sky Saxon tribute album to be released on GRA records later this year. The track, titled 'Lost In A Daze' was written late in the life of Sky and is a spiritual hymn to his wife and the Source family. We are deeply honoured to be given a track that has been heard by so few people and we hope that we have done Sky justice." The album also features The Damned, The Chocolate Watchband, Electric Prunes and Iggy Pop to name a few and there's details to be found here. Earthling Society also have recorded what Fred describes as "a charmingly amateurish video for an unreleased track called 'God In The Mushroom'. The track is an acid-country tinged ballad dedicated to the genius of Roky Erickson and Tommy Hall and can be viewed here. Finally, Earthling Society are booked to appear at the Lost In The Woods festival.
Tonefloat Records are just about to release a new vinyl-only LP from Astralaisa, the alter-ego of free festival favourites, the Magic Mushroom Band. I'll be reviewing that shortly, but I notice there are some very limited editions of this release on Tonefloat's order page, so an early visit to secure a copy might be a good idea!
Posted by Ian Abrahams at 16:15 No comments:

Here we are on the first weekend of the year that really suggests that spring, heck maybe even summer, is starting to rear its head around these parts, which means that even here at the Spacerock Launch Pad we are stuck into the gardening and general spring cleaning, pausing only to come up for breath and the second impressive performance of Matt Smith as the new Doctor Who. At the same time, a couple of things have landed here that once again are a bit outside of the original remit of this blog but that have rather caught the whole mood of this warm and sunny weekend and have to be worth mentioning for their zest and sparkle. And the picture of a Princess Leia wannabe complete with *that* bikini? Dunno really, it's just 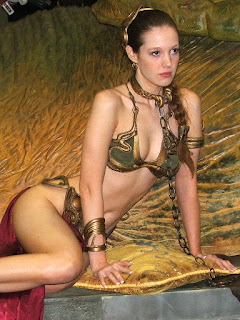 something to merge the summer sun with some sci-fi imagery, honest.

How to describe 'Candy Girl', the recently released single from Ganglians' debut album Monster Head Room? The press release talks about 'headphone acid pop', and quotes from early reviews that mention 'psych pop' and a fabulous, I wish I'd written that, piece from Daytrotter that describes them having 'music that's all about woozy feeling, about just getting carried away into unfamiliar territory, where the lights are brighter and more colorful than they usually are and the sounds are made of freaky scripture and streams of consciousness.' I've actually got the album here, though I've not had a chance to listen to it yet... but I do also have a one-track promo of the single that I stuck on for the first time in the car yesterday, and from its opening whoop, through its skewed Beach Boys sensibilities and its lo-fi sunshine sparseness thought it totally charming and beguiling. More on this Sacramento three-piece to come, but in the mean time check them out here, they have a handful of UK dates in the early summer and are heading out across Europe late May and through most of June.

Mother Mother are equally grin-inducing - and, again, 'skewed' would also go very well as an opening statement to describe this Vancouver quintet. Over here, they're looking forward to the UK debut of their album O My Heart at the end of May but whilst that date looms they're about to release (19th April), a brilliant single entitled 'Hay Loft' (my two-track promo also includes 'Wrecking Ball') which is just totally madcap and eccentric from the band's spiky staccato sound to the idiosyncratic vocals and the simply wild lyrics... 2mins 44secs of bubblegum, Hanna-Barbera, whimsical vaudeville. Very smart stuff.

Posted by Ian Abrahams at 14:55 No comments:

Red Sparowes - The Fear Is Excruciating, But Therein Lies The Answer 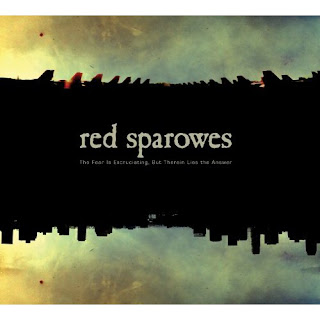 Arguably the boldest and most invigorating spacerock-related album I've received in a very long time is this instrumental LP from Los Angeles-based Red Sparowes, who I've not come across previously but who include guitarist Bryant Clifford Meyer of Isis, a band I have reviewed here previously, amongst their members. They've been around, through various line-up changes, since 2005 when they released their first full-lengther, At The Soundless Dawn, which was followed the next year by Every Red Heart Shines Towards The Red Sun and a digital EP, 2008's Aphorisms.
What's so terrific about this collection is to be found in its vibrant sensibility and its life-affirming brightness. Red Sparowes mix a muscular backdrop of sound with an exciting melody at the front of their music that has an anthemic intensity to it which drives proceedings forward with a powerful vision rippling with energy, but they consistently harness this with an atmospheric sense of mood that is both effective and affecting. In this way, their sound is big, widescreen even, but still retains a sense of constraint and intimacy about it that they dip into throughout the record.
Tracks like 'A Swarm' have a Pink Floyd feel to them, drifting endlessly and effortlessly in an intoxicating haze; 'Giving Birth To Imagined Saviours' rises majestically, almost triumphantly, out of beguilingly delicate beginnings, its arms out-stretched in a joyful ecstasy, all-powerful and all-embracing in its splendour. Lets try not to get too hung-up on picking out high points of a record that is consistently imaginative and breathtaking though; instead I'll recognise that if we have other albums to come this year in this genre that arrive and challenge The Fear Is Excruciating... for its place at the very top of 2010's selection then we'll be doing very well this year indeed.

Posted by Ian Abrahams at 14:34 No comments: