Hello Everybody! For once, a post that's not even remotely to do with music, spacerock or otherwise. I'm proud to say that my three boys have signed-up for the U16 contingent in the forthcoming Sport Relief charity running event on 21st March 2010 and will be running a mile at their local event. If you've enjoyed this blog over the last two or three years (or if you've been reviewed here of course!) and you'd like to make a small donation to this worthy cause please could you consider sponsoring them through their team page and help them reach their target. Any donation is most gratefully appreciated! Please sponsor them by clicking here.
Thanks!
Posted by Ian Abrahams at 15:07 No comments:

Here's some information received from Sweden's legendary darXtar on their visit to the UK this summer and a track they've got on a new compilation:

"This summer darXtar makes a rare UK live appearence at the Sonic Rock Solstice Festival in Wales and other cool names on the bill include Hawklords, PRE-MED, Gunslinger, Litmus and many more. All we can say is the band can't wait! Read more on the festival homepage.

The 3-CD box set Rokstenen - A Tribute to Swedish Progressive Rock of the '70s is now finally out on Musea Records. darXtar have contributed with their very own interpretation of Ralph Lundsten's 'Cosmic Love'. Read more at Musea's homepage.

'Cosmic Love' can for a limited time be heard on the darXtar official myspace site."

That seems the ideal opportunity to plug the always well-received SRS Festival! 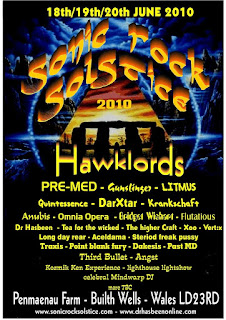 Posted by Ian Abrahams at 11:10 No comments: 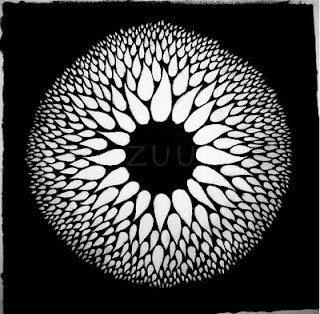 I’m always a little frustrated when a very decent CD slips through the letterbox from foreign climes (long time blog readers will know that I’m based in Cornwall, so the parochial nature of us down here suggests that a CD incoming from almost anywhere can be considered to have hailed from outside of our shores), and I go looking for more information on the band or artist in question, only to draw, more or less, a blank. That’s very much the case with this release, a really rather good second album by a band that I’ve since discovered are Los Angeles-based but who have an empty page on their website where their press kit and biography should be. Come on chaps, more information for us facts-starved music journalists if you please! I know the music should speak for itself, but (and this really is a general pointer, I think), a bit more meat on the bones regards to context would be most appreciated!
Anyway, that said they do have an interview with Dan Goldin of the excellent ‘Exploding in Sound’ and were on his download compilation that I blogged here a few months back and from that I’ve discovered that they were formed in LA back in 2003 by vocalist and guitarist Omar, have previously released an eponymous album and that this sophomore offering has been gestating since 2005 and features current collaborators Tyler on bass and Emvy on guitars whilst the drums for the album were provided by Erik Eldenius though their current drummer is now Kevin Offitzer.
I’d hesitate slightly in using the word ‘gloomy’ to describe what’s going on across the fourteen tracks here, but it’s an atmospherically dark album with an accompanying muted production tone and if I was going to point a finger and try and place it within an overall vibe I’d look at the Smashing Pumpkins as my first reference point, though the band themselves would invoke the Pixies and My Bloody Valentine with equal justice. Their songs have a power and a drive about them that’s highly potent and demands to be turned-up all the way, and a density to their sound that adds bleakness or relentlessness to the overall effect which really plays to their strengths. Listen to the second track, ‘Water’ and hear how this combination totally delivers on its complex set of moods.
They throw some wistfulness into the mix with ‘Nothing Special’ and ‘Sigh’ and in invoking the darkness in their music, it’s important to take also that underlying note of hope through adversity that seems to me to be a key element to the character of their songs. (I'll note hear that Omar describes to Dan Goldin that he draws a lot of his inspiration from the city, "endless alleyways... old abandoned buildings and freeway overpasses.") There’s a couple of haunting and reflective instrumental interludes, ‘Retrograde’ and ‘Amnesia’ which give a floating, spacey, vibe to proceedings, but the overall texture is that muted, even tightly-coiled aspect which, though it occasionally lapses into becoming rather too grey in feel, is really what makes this album a quietly sophisticated representation of mood.
But what I’m hearing here might well be a staging post to the ‘final’ version of Everywhere, since as I understand it the songs are currently being remixed by Ken Andrews, from Failure, and I’ve been lucky enough to receive MP3 copies of the first three tracks that he’s worked some additional magic across (‘Wasted Today’, ‘Water’ and ‘Nothing Special’). Andrews has made what were already very powerful tracks that bit more smart and vivid, let’s use the word ‘commercial’ in the sense that he’s brought a greater immediacy and approachability to what these guys already have. So it seems what’s happening is that a good collection of songs is now being reconstructed and developed further for a ‘proper’ release this year which seems to me to be an excellent strategy and one that I hope pays really dividends for this exciting outfit.

Endeavouring to keep up with the bits of information that you need to know about. "Need to know, old chap, need to know." This is stuff we all need to know!
Andy at Omnia Opera e-mails to advise some updates and latest happenings in Omnia land. Firstly they've established a mailing list at their website, which you can sign-up for here. Andy also been adding photographs - loads of galleries from the various eras of the band and a couple of tracks as a taster for their forthcoming new album which he confirms is "in the pipeline as we speak." Groovy!
The latest R2 magazine landed in the mailbox a couple of weeks back and I've been meaning to mention it here - I'm not reviewing anything that is specifically spacerock there this time around, but can be found really enjoying Dead Confederates Wrecking Ball, Tiger Please They Don't Change Under Moonlight, a very nice instrumental album by guitarist Micky Moody entitled Electric Journeyman and both the new album by The Wonder Stuff's Miles Hunt and Eirca Nockalls, Catching More Than We Miss and their excellent compilation album Shared which features three tracks each from various of their friends, including Wayne Hussey of The Mission. All absolutely fabulous releases.
EMI have sent over promos of their forthcoming two-disc collection Hawkwind - At The BBC 1972, which I'll be writing up for a forthcoming issue of Record Collector; this is principally two cuts of the Paris Theatre In Concert Radio 1 concert from that year, but with a couple of tracks culled from a Johnnie Walker session earlier the same year - 'Brainstorm' and 'Silver Machine'. Quality on the sessions cuts is rather grainy but it's a chance to hear a version of 'Silver Machine' that's in the style of the single itself, complete with Lemmy on lead vocals. The two versions of the In Concert are a re-indexed version of the mono Windsong release from the early '90s and the stereo version that's been bootlegged around for many years now and runs about four minutes longer than the Windsong. Would be great if one day there was a proper Hawkwind at the BBC boxset, but until then this is a decent start.

Jean d’Auberlaque of Scarlet Utopia, whose album Adventures Under Black Light I reviewed here a few months back, has let me know that the band have now signed a deal with "a really cool record label" for a reissue of that album... and a limited edition vinyl version.

And with that bit of goods news I'll sign-out. Coming up in the next few days we've got some Quarkspace (at last!), a great release that's been sent over from Canada by a band called Zuu (Everywhere), a vinyl LP from the always thrilling Oresund Space Collective, another Voiceprint round up, news on the latest release from 4 Zero Records and, as they say, much more. Cheers!

Posted by Ian Abrahams at 19:14 No comments: