If this blog has been a little quiet lately, then the volume of new music coming through the letterbox at Spacerock Heights has been anything but! I’m going to try and catch up some stuff over the long Bank Holiday weekend, still grinning from recently being labelled ‘The Man’ by Earthling Society’s Fred Laird over on Julian Cope’s Head Heritage Forum when this blog got very kindly plugged there. And thanks and hello to the thirty-odd visitors that have followed the link and visited (see I read my analytics).
Talking about Earthling Society, their follow-up to last year’s Beauty and the Beast album is out in July but I’ve been lucky enough to receive a promo from the ever excellent 4 Zero Records which I’ll be reviewing elsewhere this summer. It’s safe to say, though, that this album, with its fixation on such 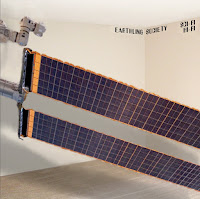 60s dark Americana as Charles Manson, CIA mind control experiments and project MK-ULTRA is destined to go down a storm in Spacerock circles.
As, indeed, judging by the feedback on the Internet from their recent preview gig in Walthamstow, is the imminent third album by Litmus of which a review should be appearing here in the next few weeks. Released by Rise Above Records, as was their stellar Planetfall a couple of years back, this will undoubtedly be one to watch out for. Keep an eye out also over the summer for the second Spirits Burning with Bridget Wishart CD, Bloodlines, due from Voiceprint. I’ve heard some of the tracks in development over the last few months and it sounds to me that if you liked their first offering, Earth Born, then you’ll be blown away with this one.
Talking about being blown away, I had some e-mails with Alisa Coral of Space Mirrors (recently reviewed here) recently, where Alisa kindly told me that the reason she’d decided on Space Mirrors as a name for her band was from a suggestion I’d made in an e-mail exchange a few years back. 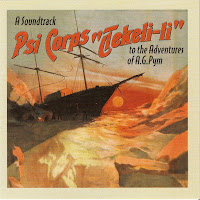 .. which was rather thrilling news actually! Alisa kindly sent over another new CD that’s she’s had released, this time through the exciting RAIG label from Russia, like the new Space Mirrors this is a concept album. This time Alisa and Michael Blackman performing as Psi Corps have composed a collection of music based on the works of Edgar Allen Poe, “Tekeli-li”, which I’ll be scheduling to post a review of in the next few days. Alisa has also been producing the Russian Spacerock band Vespero who also have some albums out on RAIG and I’m hoping to be reviewing some of their work in the near future. One more cheer for RAIG who have also recently issued the new Sendelia album, The Girl From The Future Who Lit Up The Sky With Golden Worlds. I won’t be reviewing that one here, because I’ve placed a review in one of the magazines I write for, but there will be an interview with Pete from Sendelica appearing here a 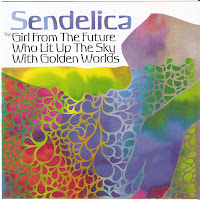 s soon as I’ve got the questions sorted out and sent over (Pete, thanks for your patience!). Another great release for fans (like me!) of trippy, Kraut-influenced Spacerock, so please do check it out!
Talking of getting Spacerock to the masses, the latest Rock N Reel magazine has now appeared, rebranded as R2 if you’re hunting the shelves of WH Smith for it (I hope you are, please support independent music press!), and I’m delighted to say has my review of Serpentina Satelite’s Nothing to Say album (released on German label Trip in Time). Always great to get a bit of extra exposure for the genre and its musicians! Away from the Spacerock scene, I’m also reviewing releases by The Sensational Alex Harvey Band, Joe Jackson, and Bish, and supporting the Bish review with an interview with main-man Darryl Hunt (also of The Pogues) in the current R2.
And with that round-up of all-things Spacerock landing on my doorstep in the last couple of weeks, I’m off to enjoy a well-earned Vodka Martini (made with Absolut of course), and dip into Helter Skelter’s latest title, Paul Sutton Reeves’ book on Bill Nelson & Be Bop Deluxe, Music In Dreamland. Oh how exotic the cover of their Drastic Plastic album looked in the window of John Oliver’s record shop in 1978...
Posted by Ian Abrahams at 19:50 No comments: 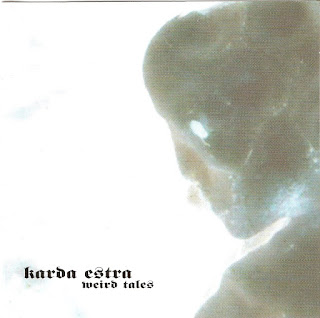 “I wanted a host to open the proceedings, rather like in an Amicus portmanteau horror film,” notes Richard Wileman of his tribute to Peter Cushing, the scene-setting ‘The Whitstable Host’, which opens the latest Karda Estra album with gothic disquiet and sets-up the mood for much of the remainder of the work. Karda Estra is Richard and collaborators, which this time includes my old mates Don Falcone and Bridget Wishart adding their instrumental talents to these symphonic movements (both appear on ‘The Eye of Silence’, Don contributing organs and synth arpeggios and Bridget playing her EWI wind synthesiser).
Though Richard takes the title of this release from the classic American pulp magazine, home of those wonderful yarns from H.P. Lovecraft and Robert E. Howard, the influences he’s taken in composing his progressive-goth soundtracks are wide-ranging. Howard’s Solomon Kane (‘Skulls in the Stars’) rubs shoulders with the Dadaist painter and sculptor Max Ernst (‘The Eye of Silence’, Ernst’s 1937 painting which also seems to be reflected in or partly shapes the cover artwork here). ‘The Atom Age Sense of Impermanence’ borrows a line from Kim Newman’s novel Dracula Cha Cha Cha (which, funnily enough, sits glaring at me, unread, from a bookcase here at Spacerock Towers and is, therefore, ripe for rescuing to the top of the ‘must read’ pile). Writers and painters are the driving force almost everywhere Wileman looks: Victorian ghost story author Sheridan Le Fanu, English artist Edward Burra, surrealist painter Andre Masson. I like that acknowledging of the reference points from which he’s painted his aural visualisations, it’s an inspiring thing in and of itself that leads the listener into looking up those points of interest, into digging a little deeper into the ways in which past creators have informed modern works.

Putting those inspirations aside though, Weird Tales could also be a film library soundtrack collection, both of those Milton Subotsky Amicus Productions movies and their Hammer counterparts, and indeed of those neglected 50s and 60s SF films, The Time Travellers and its ilk. This is particularly apparent as the atmosphere changes over the course of the tracks to take itself from the understated but funereal sounds of its early part to the more sci-fi sequences that round out the album, ‘Island Universes’ and ‘There is No Finished World’.
Kadra Estra capture an ethereal essence in their music, Wileman composing and producing work that has an elegant sense of space and distance between the musicians whilst calling on a range of instrumentation each of which complements the overall sound: violin, cor anglais, oboe, clarinet, tenor, alto and soprano sax, tuba. Weird Tales is richly rewarding in managing to be multi-layered whilst at the same time being unfussy and low key; a quiet soundtrack to think and muse to, really. 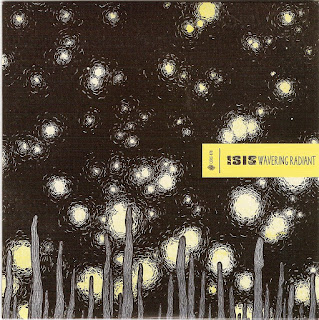 Here’s one huge slab of force chiselled into seven tracks and released on CD and a (hallelujah!) 2LP vinyl edition, from a band that have been honing their work over the last twelve years to eventually arrive at this majestic collision of guitars, electronics and dynamics. It’s an epic vista, bold and brooding, concentrated and totally focused, drawing you in and surrounding you in its all-encompassing intensity. Isis take no prisoners, brook no dissent; they are powerful, driven and atmospheric, whilst their sound relies on bold drumming and urgent guitars... and jarring, guttural vocals.
That grating vocal style, prevalent also on the Space Mirrors disc recently reviewed here, is, I’ll concede, in keeping with the overarching, bellicose, style of this album so it’s rather churlish, in a way, to pick it out as the weak-link in an album that demands full-volume playing and delivers its strengths in spades. And in fact, two or three listens in and Aaron Turner’s rasping mode actually becomes more listenable than his more ‘progressive rock’ sounding singing voice and fits into the total drive of the album.
But Wavering Radiant is less about the vocals, producer Joe Barresi (who enjoys credits with Queens of the Stone Age amongst his notable achievements) has set these fairly low in the mix in any case, and more about the competing textures employed in the overall sound. ‘Hall of the Dead’ opens in a dark, sinister, mode that sets up the uneasy environment in which this work operates. ‘Stone to Wake a Serpent’ escalates from lightly-played guitars and electronics to harsh theatrics across its eight and a half minutes, echoing the guitars from ‘Hall of the Dead’. Everything about this record is of epic, granite, construction; it’s a tense work, tightly sprung; exploding out of its coil and then retreating back into itself again ready for the next wave of sonic assault. Isis produce a range in their work that is well-crafted and atmospheric and yet subservient to their original intentions of battering, extended riffs; all power to them.