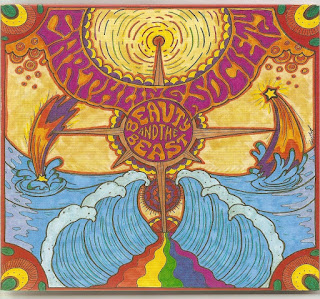 I’ve seemingly overlooked Earthling Society before because this Lancastrian band have already released three albums, Albion, Plastic Jesus and the Third Eye Band, and Tears of Andromeda, none of which I’ve heard. So I can’t really comment, from a perspective of what’s gone before, on their assertion that they’ve left behind their more obvious spacerock leanings in order to “drink deep from the well of visionaries such as Syd Barrett, Todd Rundgren, Kevin Ayers and John Cale.” What I can say is that they’ve released a strong contender for modern-psychedelic album of the year … if only there were such an award!

Beauty & The Beast is understated, warm and hazy psychedelia that’s wrapped around some beautifully crafted songs, for the real strength of this album is, indeed, the song-writing on display here. The music, meanwhile, is twelve-string guitars, Theremin, Bazouki and Mandolins, Mellotron and Hammonds and has a late 60s upbeat vibe coupled with a fuzzy summertime flavour running through it. Tracks like ‘Sundropped’ and ‘Valerie A Tyden Divu’ really drift out on elongated instrumentals of kaleidoscopic shifting colours, trance-like and absorbing yet gentle and comforting whilst others like ‘A Modest Flower’ have a perfect pop-sensibility dripping through them. When the label suggests that this is a fusion of West Coast psychedelia, acid folk and Krautrock they couldn’t describe it better.

I think Rock N Reel magazine have the exquisite ‘The Boy With The X-Ray Eyes’ on their cover mount and have therefore laid-out the album’s best track for pre-inspection. But if you find that track pleasing, there are nine others waiting to be explored and it’s a definite must-buy for anyone with a penchant for well-played and delightfully conceived psychedelic-pop. Very highly recommended. And while we’re here, a big cheer for Dave at 4 Zero Records who is producing these beautifully put together packages (see also the Mushroom release reviewed here, and the recent Here & Now live CD Coaxed Out From Oxford). More power to him!

Posted by Ian Abrahams at 19:26 No comments: 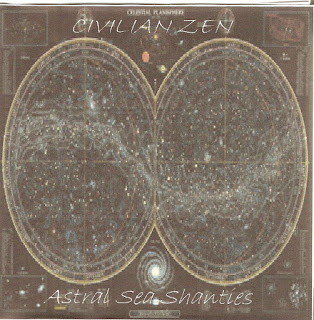 
Firstly, I have to apologise to Keith Hill of Civilian Zen who sent these CDs over for review several months back and has been extremely patient in awaiting the verdict! Civilian Zen is Keith and free festival poet Mark Broster who have a stated aim in creating “something spacerock-ish, ambient, trancy, yet fresh and eclectic.” They released a charity CD in aid of the homeless and housing charity Shelter in 2006 and last year issued its follow-up, Return to Shelter collaborating with former Hawkwind luminaries Bridget Wishart, Jerry Richards and Steve Swindells amongst their many guest artists. I think these two releases are still available, but if you are interested in purchasing copies for this fantastic cause then please contact the band through their myspace page to check.

Astral Sea Shanties again features the core line-up of Keith and Mark, this time joined by Neil Whitehead (of vert:x, reviewed elsewhere on this blog), saxophonist Chris Swift and guest vocalist Paula Farebrother. It’s probably the trickiest CD to get to grips with that I’ve reviewed on this blog so far because it’s quite experimental in places, more standard fare in others and really needs an intensive listen to appreciate fully. Now, that’s not a bad thing in and of itself but it does leave the listener wondering where the limitations of the recording begins and the reach of the imagination involved ends. In other words, what has been created for effect and what is the band striving for things that don’t quite come off, particularly from a production sense, which is mainly where I felt the album let the material down a little.

Now, that sounds as though I’m being critical about this release and actually that couldn’t be further from the truth. The material itself is intelligent and evocative, clearly very heavily SF influenced, full of futuristic imagery and well-written lyrics. ‘Serenity Suite’ for example, which has the tone of a Calvert or Bainbridge spoken-word composition (probably edging towards a restrained version of a Bainbridge piece) is confidently delivered against a chilling radiophonic backdrop. I thought that ‘Mystikal Energy’ (track five) was where the album really got going musically, however, and its interestingly another track that somewhat echoes Harvey Bainbridge’s Hawkwind work with repetitive electronic rhythms. Further in, there is still a tendency to overdo the sound effects (that’s not unusual in this genre) but there’s a good mix of styles. ‘Rising Tides’ is a beautifully mellow piece with a delightfully dreamy quality about it as does ‘Fractal Message’ and ‘Distant Shores’ and, really, though Civilian Zen might have other objectives in mind in the wider scope of their work – this is what they do best. Mind you, they also rock-out very nicely on ‘Gardens of Paradise’, though again there’s a feeling that a little clearer production would serve them better.

There’s a lot of really good stuff going on here. Civilian Zen need to hone it a little more but they are certainly on to something worth developing. If they have a look again at this material and identify its strengths and modest weaknesses (and consider whether all the effects they employ serve them quite as they’d hope, and I say that whilst understanding where they are coming from in that area) they’ll go from strength to strength.

Posted by Ian Abrahams at 19:23 No comments: