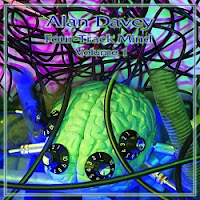 Cast your mind back to the late 80s when Alan Davey was first finding his way as a member of Hawkwind and to the double pack of singles released by Brian Tawn through his Hawkfan label 'The Elf' EP; five numbers that Davey had recorded on a four-track tape machine. The vinyl is long out of print and now highly collectable in its own right. Fast forward to 2007 and find Davey trawling through his tape collection and discovering masses of extra tracks stored away and in need of salvaging and crying out to be made available. Hence this new series of CDR releases available direct from the Bass Monster himself, the first volume of which appeared in November 2007 with the remaining three to be released in stages through 2008.

"Excuse the sound quality because these are old" notes Davey in the accompanying liner notes. Well, no apology required here because the tapes have emerged remarkably well preserved and the sound quality, whilst indicative of the basic equipment used to record these tracks, is more than acceptable. It's fortunate that the project has been started now, though, as Alan goes on to suggest that "another year or two and I think a lot of it would have been lost."

Let's give thanks, then, for the timely intervention in the decay process that has occurred because Four-Track Mind gives a fascinating insight into the development of Davey as a musician and, for the Hawkwind historians among us, an interesting view of some well-known Hawkwind tracks in their early demo state. That's particularly valuable as, although some of Dave Brock's demos have been officially released (on the Weird Tapes series for example) and Bob Calvert's solo demos received a legitimate airing, there's been scant other Hawkwind 'work-in-progress' made available aside from some early 80s Rockfield demos that have circulated the traders network over the years. Here, for example, early versions of 'Sword of the East' and the Bedouin song 'Chasing the Dragon' are laid out for posterity whilst future volumes promise Davey's initial workings on 'Back in the Box' and 'Wings' for a start.

So it's classic Alan Davey territory all told, swirling synth sounds and rhythmic bass lines - these recorded between 1986 and 1988 and including his first ever four-track recording 'R.E.M. Time' and his hilarious take on the famous Pink Panther theme-tune interpreted in the style of Lemmy and entitled 'Motor Pink Head', which is worth the price of admission all on its own.

Volume 1 is predominately instrumentals, captured using a Fostex X 15 four track tape machine, a Roland drumatix drum machine and a Roland Juno-6 synth. The equipment might sound primitive but there's a useful discipline involved. As Davey says “If a song sounds good when recorded on a four-track machine, you know you’ve got a good one as there’s no space for tarting it up." And these sound great. 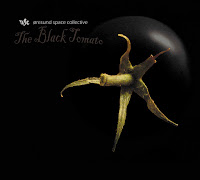 Oresund Space Collective is a grouping of Danish, Swedish and American musicians that formed in 2004 and The Black Tomato is its third studio album following on from their eponymous debut disc and the double CD It's All About Delay. Longtime observers of the space rock scene will know their synthesiser player Scott Heller (formerly of Gas Giant) who, when not jamming for the OSC works at editing the Aural Innovations website for Jerry Kranitz. The band are dedicated free-form space rockers, releasing volumes of studio improvisations on their website as well as maintaining a web archive of live recordings downloadable in MP3 format for their followers. "My philosophy is that once we have played the music, it belongs to the fans" Heller has said.

OSC came together at Heller's instigation when he approached members of Copenhagen-based Mantric Muse and Sweden's Bland Blanden (from Malmo) and created this collective to operate as a regular jam-band, alternating between bases in Denmark and Sweden and following the music wherever it led them. There's an Ozrics overtone in there, a bit of Krautrock and an acknowledged taste of 90s and more recent space rock stirred in as well with Heller nodding in interviews towards Hidria Spacefolk and the much-missed Doug Walker's Alien Planetscapes.

Recorded over two days in November 2006 'as live' at Black Tomato studios and divided up into three distinct movements, The Black Tomato veers from industrial-edged space rock (that heavy space freighter sound that characterised the Vert:X release previously reviewed on this blog) mixed with more intricate sounds. Yes, there's parts that blast their engines into infinity but there's also music for the spheres and it's a changing, evolving and texturally dense soundtrack that characterises the work of the musicians here. Hypnotic in a Can or Amon Duul way at one point, spacey and tripped-out in a more Hawkwind tone at another. It's extremely high quality musicianship being employed here, OSC are indeed a class act and with the complexity of sound achieved it's hard to remember that here are eight musicians in a studio following their muse and improvising on basic structures rather than a well-rehearsed and overdubbed ensemble. There's a strong vibe, a real groove that draws you into the recordings so that whilst it's a CD in three acts (and the first two acts are broken down into smaller chunks to enable to listener to track through the album as required) it really works best if you switch-out your mind from it being a nine track sequence and embrace and absorb it as one compelling head-trip.

Appropriately named after the Oresund bridge that connects Malmo in Sweden with Copenhagen in Denmark, OSC is a real meeting of minds and talent and The Black Tomato as impressively accomplished space rock as you're likely to find in this part of the Galaxy.