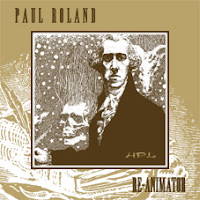 This album turned up in a bundle of releases from my friends at legendary Italian label Black Widow Records, and whilst it doesn’t particularly qualify as ‘Space Rock’ I was particularly impressed with it, hence its inclusion here.

Roland is an author, spiritual counsellor and musician, his first album Werewolves of London, was released in 1979 and was followed-up with a number of records through the 80s though he’s been less active as a recording artist in recent years. His work has often taken him into the realms of victoriana with its focus on the supernatural and the gothic. Re-animator is no exception to this, being heavily influenced by H P Lovecraft and Edgar Allan Poe. The opening track is written first person from the perspective of Lovecraft’s Charles Dexter Ward, his fictional Massachusetts city Arkham features in another and the album’s final track ‘Cthullu’ commences with a reading of an excerpt from The Necronomicon.

It’s a full band affair, featuring contributions from Caravan’s Geoffrey Richardson and Jim Leverton amongst others. I’m tempted to make a slight comparison with Phantasmagoria-era Damned in the manner that this highly accessible and entertaining fusion of gothic and pop works in a arch and knowing way but it’s fair to say that Re-animator is the more mature work.

Roland’s ear for a good tune shines through on tracks like ‘Swamp Girl’ with its New Orleans flavoured sounds and lyrics whilst his acoustic guitar playing weaves through the album creating much of its atmosphere. Re-animator is rich with forbidden knowledge and mystical unease but always in an engaging, Weird Tales, sort of way.

Posted by Ian Abrahams at 09:19 No comments: