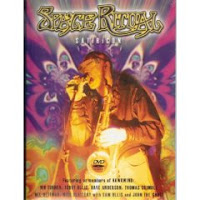 Whilst their long awaited debut album still lingers in the Outer Limits waiting to be released, Nik Turner’s ‘not quite Hawkwind, but…’ outfit have released this DVD of a 2003 gig at the Shrewsbury Buttermarket.

Bearing in mind the rather dubious qualities of some of the early concert footage released by Hawkwind themselves, and the rather shoestring operation that you’d imagine this ‘alternative’ vision might be labouring under, there is very probably an ‘approach with caution’ mentality amongst the fan base for this package. Which is an enormous shame, because despite its limitations, this DVD is head and shoulders above the production quality of those early Jettizsound videotapes and has an unexpectedly professional sheen to it.

Starting with the peripherals, the disc comes in a full-colour open-out cardboard case with a poster folded inside with a detailed write-up on the band by Mojo editor Phil Alexander printed on the reverse. Aside from the gig itself, the disc contains some interesting bonus material comprised of interviews with the band (or rather with Turner and then bass-player Dave Anderson, with the rest of the guys looking on) and individual conversations with keyboard/guitarist Thomas Crimble and drummer Terry Ollis. As I noted in Record Collector, though these reminiscences are both enjoyable and, for the SpaceRock historian, of historical benefit there’s just a lingering feeling that their issues with Hawkwind’s Dave Brock have been played out in public to such a degree that it’s time they let it go. A focus on the untapped reservoir of anecdotes of their time as the most prominent of the Ladbroke Grove freak bands and prime movers of the early 70s counter-culture would be both more rewarding and ultimately of greater benefit to their audience.

Where this disc really scores though is with the presented footage of the band. Nicely filmed with clear visuals and good sound quality, it’s a cracking show that, whilst dominated by their reinterpretations of early Hawkwind numbers has enough imagination in the arrangements and sparkle in their deliveries to maintain the interest. Their style is loose and improvised to a large degree and whilst Turner’s critics would label that as ‘under-rehearsed’ I think that’s somewhat unfair – this sort of ad-hoc, slightly shambolic, rabbit-out-of-a-hat approach is what he does and, it’s fair to say, what his audience loves him for. And they’ve got stuff going for them that has been missing in Hawkwind, in particular the regular presence of Angie Fallon (‘Miss Angel’) and her brand of coolly delivered dance interpretations knocks right into space the rather unwieldy style of ‘performance art’ deployed by Hawkwind’s dancers in recent years. On the other hand, less can be said of Space Ritual’s Stacia substitute Debespace (who, in any case, seems no longer to be a regular fixture at their shows, just like the rather effective trilling and warbling of Jackie Windmill which is in evidence here). Watching her, I’m unfortunately rather reminded of a mid-70s Hawkwind review which compared Stacia’s routines to a lumbering Ray Harryhausen animated object.

Musically, though, I really like what Space Ritual do and though they’ve moved on a bit since this film was shot (loosing the services of Dave Anderson and gaining Earth Lab’s Jerry Richards in his place for example) there’s a lot in this concert to enjoy. Their fusion of SpaceRock with free-form jazz overtones means that whilst they make a really good bit of noise when they want to, their sound has a lot of room to breathe. So, though they eschew the dense and heavy delivery of some of Turner’s other versions of his Hawkwind vision (I’m thinking particularly of his work Stateside with Tommy Grenas and Helios Creed amongst others) they give a valid re-evaluation of his songs (D Rider always sounds terrific). I’d like to hear them working through more of their own material, as usual with their set-lists we only get the rather catchyTime Crime and the fairly stolid Sonic Savages. But I suspect a lot of their audience has them marked-down as a superior tribute band and want to come away feeling they’ve captured back something of the early 70s and in that regard alone this is a DVD worth its money.

Posted by Ian Abrahams at 17:05 No comments: